While kids these days have smartphones and video games to keep them busy and their curiosity at bay, children (and sometimes adults) in days gone by used marbles as play-things during spring.

The marbles gave children the opportunity to interact with one another, and develop life lessons and strategy skills through the ‘business’ of bargaining and trading of marbles.

Over the years, millions of these marbles were manufactured to keep up with the demand. These marbles came in various patterns and styles, giving anyone ample reason to collect them.

If you can identify an antique marble, either the originally handmade ones or the machine-produced kinds, you can precisely place a value for purchase or for sales. In this article, you’ll learn all there is to know about identifying an antique marble and how to value them. 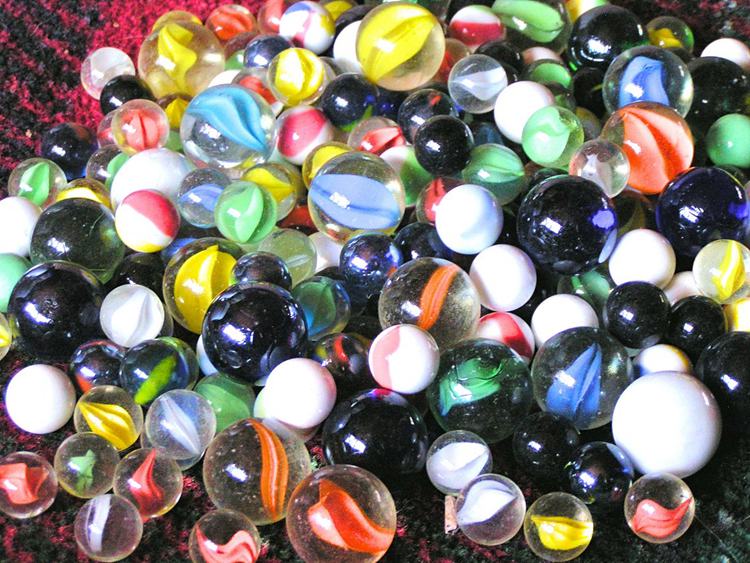 As popular as they were, no one knows for a fact who invented marbles or the exact period they surfaced. However, owing to the fact that they were found in ancient Egyptian tombs, children’s tombs in Nepal, and even Native American Mounds, we know they’ve been around since the early times — possibly around 3000 years ago.

Each civilization used marbles for recreation purposes and even spiritual mediums.

The game of ‘marbles’ is thought to have originated between the 1500s and 1600s when the Dutch would grind valuable stones to form round shapes. Soon enough, the Germans began using agate to make marbles.

In the 1800s, a factory in Europe began making cheap clay marbles using various ceramic procedures. However, they were plain, brown, lacked eye appeal, and common. Because of their ease of availability, they were called ‘Commies’.

However, glass marbles made their first appearance in Germany, in the Thuringen region. Made by heating a colored/clear transparent glass cane with a glassblower, these marbles came in various patterns.

How to identify antique marbles

Differentiating The Old From The New

In the 1800s, marbles were being mass-produced and shipped to locations of high demand. As expected, original and antique marbles were limited in number and thus, expensive — some trading as high as $7,000 – $9,000.

As the years advanced, collectors became even more eager to find these rare pieces, exploitative dealers began reproducing these items and passing them off as the real deal. There are various ways by which you can determine an authentic antique from a fake. They are: 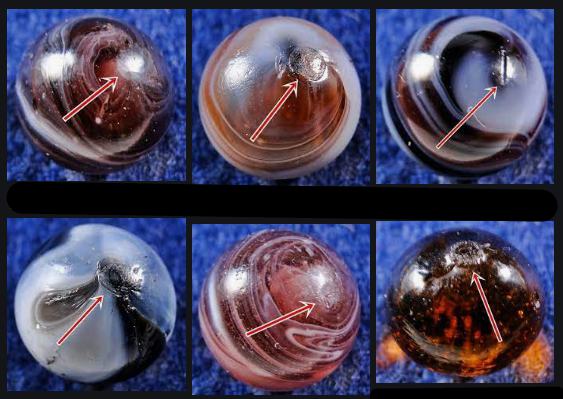 The pontil marks are small rough patches opposite each other on the marble. It is usually gotten when the marble is handmade in a glassblowing process. While the procedure is being carried out, a stick is placed where the marble is supposed to be attached. Once it is formed, the stick is broken off. Thus, leaving the patch.

However, there are exceptions. Some handmade marbles don’t bear these marks and could be confused with the machine-made ones.

As such, other factors, asides from the pontil, should be considered before arriving at the conclusion that a marble is antique or not.

Antique marbles have more vibrant and attractive colors than their modern counterparts. This is especially attributed to the fact that each one was individually made with care and precise concentration; unlike the modern ones that were made in high quantities.

Pro Tip: If it looks like the color seems to have been applied over the glass base surface, the marble is modern.

This might be tough to place if you are a new collector, but experts can tell the difference quickly. You can get the help of one to check the marble for authenticity.

In addition, these antique marbles have patterns that tell you what period they were made in, and sometimes their country of manufacture. You can familiarize yourself with books on the topic to help you with the identification.

Visit marble museums and pay close attention to their collections. This will assist you in clearly recognizing how an antique marble looks.

Another way to get familiar with the appearance of marbles is to join collectors organizations or attend collectors events. Here, you get to share knowledge and experience with people of similar interests.

This is perhaps one of the fastest ways to differentiate an original from a fake. Rare and antique designs have small figures of animals or people at the center. They are termed ‘sulphides’ and were produced in the 1800s. Usually, they are about 1  ⅟14 inches big.

4. Quality of the Glass

Since antique marbles were used in games in the old days, the quality of glass that was used was high and harder to break or crack. Modern-day marbles were produced with lower-quality glass since demand superseded purpose. They were cheaper and can shatter easily. 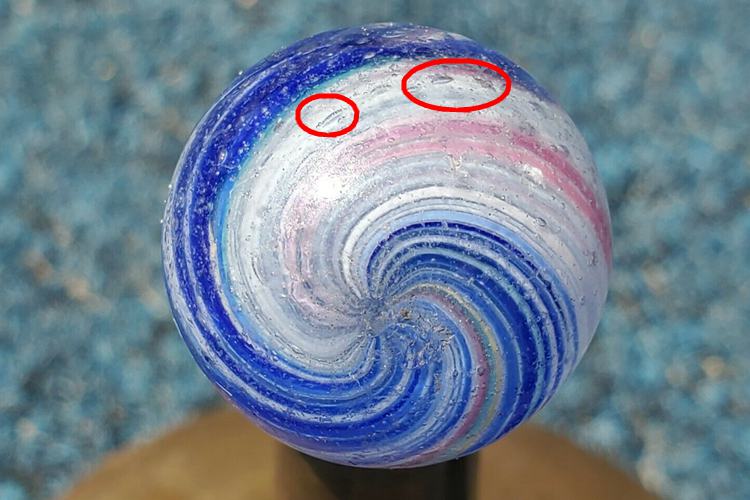 Antique marbles were handmade, so it was difficult to achieve a perfect design. Asides from the pontil, they also have flaws like marks that could indicate age and bubbles. These bubbles were made when the glassmaker would blow into a round blob of molten glass.

Antique marbles are found in a large range of designs and types. Some handmade ancient marbles were made from clay and other minerals like alabaster and limestone.

The German glass marbles are the most popular types across countries. And, they came in the following styles:

Latticinio Swirls: Gotten from the Italian word meaning ‘net’, this marble has a network of strands in its core, with a clear base. They are usually white or yellow. However, you can find rarer ones in yellow and green.

Solid Core Swirls: This marble has a clear base with one or several colored strands of color tightly packed together within the core.

Divided Core Swirls: The Divided Core marble has three to see multiçoloured bands, with clear spaces between them.

Ribbon Core Swirls: This marble has swirls of ribbon around the core.

Coreless Swirls: The Coreless or Banded swirls do not have any band at their core, but they possess strands or swirls at the outer surface. The base of the marble is usually green, blue, or clear.

These marbles possessed an opaque and sometimes translucent base with a stretched colored swirl. The rarer versions have multiple swirls and are multi-colored.

These marbles are opaque with a characteristic black base and possess stretched bands of colored swirls on their surface. 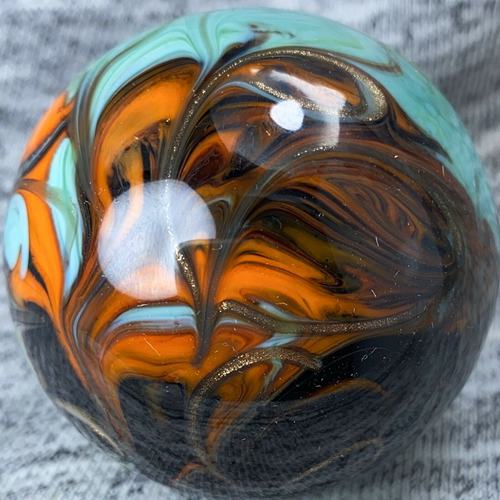 These marbles are classified as the crown jewels of marbles and are heavily sought for their beauty and brilliance. They have golden jewel-like veins amidst a clear transparent base.

The end of day marbles was created at the end of a workday with leftover glass crumbs. These marbles were given as treats to children in the neighborhood. Because of the different scrapes used, no two marbles were the same.

Mica marbles are either colored or clear, with no apparent design except mica flecks suspended in the sphere. These flecks sparkle in bright light and have artistic value.

This marble appears solid-colored but actually has a clear base. The clear core is covered by a clear layer of an opaque color, and then, a thin sheet of clear glass is placed over it. The marble layering of glass resembles that of onion skin, hence its name.

Sulphides have a characteristic feature—a figurine at the center in their clear spheres. The suspended figures are mostly silvery and could be animals, numbers, people, and other objects. Rare sulphides usually have two figures contained in their center.

How to value antique marbles

The value of any antique marble is largely based on the condition. Marbles that are dulled, chipped, crapped, or heavily scratched out are less valuable.

Other factors that could affect the value are:

To determine the values of marbles, you can compare them with marble books and guides; or on sites that sell antique objects such as eBay and Craigslist. You could also attend conventions and museums to learn more about marbles’ value.

One important thing to note is that antique marbles could have been crafted during the transition period. This period was when marble-making machines were being introduced into the industry. Hence, some antique marbles are machine-made.

However, if you have doubts about the piece, it is best to seek professional input.