You can’t talk about luxury décor without calling Chinese Porcelain in your top three list. The shiny collectibles ruled the antique world long before collection became a thing, and for a good reason.

Because of its high value, it’s necessary to take precautions before spending money on them. As you work towards updating your knowledge of valuable Chinese Pottery marks, you realize they’re similar to reproduction marks too. Now you’re left at an impasse.

Here’s the good news – it doesn’t have to be a complicated process. We’ll walk you through the evolution of Chinese Pottery marks and their significance so that you can distinguish them from reproductions at the end of this text.

Chinese Pottery encompasses a wide range of molding materials that extend past the popular early clay usage and Porcelain. Keep reading to expand your knowledge.

When you hear Chinese Pottery, the knee-jerk reaction is to think of Pottery, and while that’s not entirely wrong, the term encompasses a wider range of materials. You can also categorize Chinese Pottery based on geographical location – North and South.

Chinese pottery marks are classified based on the materials used in making them. Here are the most popular materials.

Before the Chinese discovered its signature export, Porcelain, their go-to material was “Earth-clay.” Artisans fired the porous sand at less than 1200 degrees Celsius to form earthenware, and this practice has existed since the Neolithic age.

The porosity of earthenware materials bred a necessity for a more durable material hence the evolution to the Stone Age. The artisans turned up the heat to 1300 degrees Celsius and used a special type of clay tighter than earthenware. 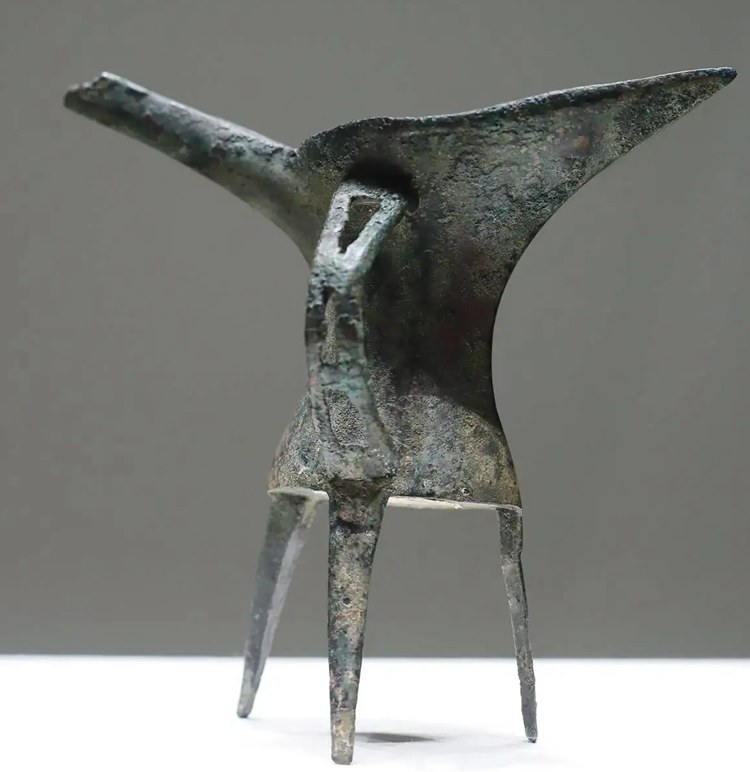 Bronze Ware is an alloy of red copper and other chemical elements such as tin and lead, and was called “Jin” or “Ji Jin” in ancient China. Bronze ware is golden when it is just cast, but it is called bronze because it turns greenish when it is unearthed because of the rusting caused by the loss of time.

Over 3,000 years ago, Chinese artisans sought to mark their items to indicate production dates and keep track of history. So, they discovered vitrified ceramic with fine clay to form artistic items under heat, so Porcelain came into existence.

The earliest documentation of Chinese Pottery was the Shang Dynasty which reigned between 1600 to 1046 B.C. Then about a thousand years later, in 25 – 220 A.D., the Eastern Han Dynasty produced the first example of Porcelain.

By 618 – 907 A.D., the Tang Dynasty popularized tea time, leading to Porcelain and Ceramic tea sets. The Artisans in this era experimented a lot and discovered the tricolor Sancai, five-color Wucai, and exotic Qingci from Hebei and Hunan.

Jingdezhen, China, became the Porcelain capital of the world, uniting the West and East through trade, thereby drawing the attention of nobles, including Emperor Zhenzong (997 – 1022).

Because of the success of the Ming and Qing dynasties in producing the highest quality Porcelain wares, the world equated it to Chinese excellence.

Even though the continental drift joined China’s Northern and Southern regions eons ago, they still operate on different ideologies and access resources that transcend their art. While the Northern artisans used coal-fired kilns, the Southerners used wood.

For instance, there was no Petunse in Northern China, so they couldn’t make Porcelain antique items, so the region stuck to earthenware. On the other hand, Southern China is rich in Silica, Potassium Oxide, and Low Alumina – a recipe for high-quality Porcelain production.

Gathered here are four Chinese pottery marks that were in use and still in use till this day.

So, remember how Emperor Zhenzong popularized porcelain production amongst royal dynasties around 907 A. D.? He took his interest a step further by insisting the artisans mark all items with his name. This marked the beginning of an era – The Reign Marks.

You’ll find these marks underneath the Porcelain item in underglaze cobalt blue and occasionally alternate overglazed colors like black, plain blue, and red. The only exceptions are Ming Dynasty’s Yongle, Xuande, and Chenghua Porcelains with inner inscriptions.

You can still identify Porcelain from this era with Double Blue empty Circles or Auspicious Symbols.

Although the practice of adding Reign Marks on Porcelains officially ended in the 20th century with the fall of imperial China, many subsequent artisans still use it out of habit and as a sign of respect to the old ways. After all, China is a cultured country that revers its history.

Note that these post-1900s marks aren’t Reign but Apocryphal Marks. Regardless, they both hold equal value unless other appreciating or depreciating factors are attached to the items.

How to read a Chinese Pottery Reign Mark

The typical writing script for Reign marks is vertical but read from right to left if you see a horizontal mark. However, if you read the vertical script, it’s okay to start from top to bottom as you instinctively would.

So, you’ll have six characters – the first two (Dynasty), middle (Emperor), and last two (Client/ Nian Zhi). Then, you’ll read it out as Made in the great DYNASTY during the reign of the EMPEROR xx for xx. If you see only four marks, then it’s the first two (Dynasty/Reign) that are missing.

How to Identify Authentic Reign Marks

Because of the continued practice of imprinting reign marks well after its official phasing out, it can be hard to separate reproductions from antique Porcelain. However, you can still find your way around that – the keyword is hard, not impossible.

Inspect the writing for a flawless finish if the seller touts the Porcelain as an imperial piece (Guanyao). Knowing all you do about Imperial China and the pride of the Emperors, a poorly glazed or written reign mark should set off your bells.

Imperial rulers weren’t the only ones interested in marking their Porcelain pieces. So, they imprinted the Hall names and locations alongside the Reign Marks. Manufacturers also added special indicators of origin to preserve its pedigree.

The good thing about this mark is that it helps you as a collector trace the origin of your antique Chinese Pottery.

The Chinese are superstitious people who believe in the power of attraction and utterances. Sometimes, manufacturers leave special symbols indicating positive sentiments on the Porcelain items like a fortune cookie.

This practice is common to gift-sets, so you can see words like “Fuh”-happiness, “Shou”-Longevity, and Luh-(Prosperity). These markings are popular amongst Feng Shui enthusiasts who believe in drawing positive energy to oneself.

Apart from the abstract bestowments on buyers, Chinese artisans incorporated their culture and religion into their pieces for various reasons.

Studying the two predominant religions in China (Buddhism and Taoism) is advisable to avoid buying the wrong thing and attracting negative energy.

Here’s a table of symbols for you based on the primary eight Precious (Babao)Things in Chinese mythology;

The Chinese are very meticulous people, so when they first started making items with Porcelain, they stuck to a uniform shape. Even though each dynasty added its unique touch (as is expected – an extra paint here or a decoration there), the basic shapes remain the same.

Once more, the Chinese are superstitious people, so they take color pigmentation seriously. The wrong shade of color may cause doom and misfortune, just as the right shade can bring fruitfulness and prosperity.

A prime example of this is the Red Porcelain typical of the Kangxi era. Whereas contemporary art associates red with danger, it represents good fortune in China. If you doubt that, take a minute to google the Chinese flag.

You should also know that the blood-red porcelain production ended with the fall of the Qing dynasty, and Chinese potters no longer use the technique that produces this special color to make Porcelain.

Another giveaway is the blue and white porcelain era. The exact shade of blue used was cobalt, so lighter shades should raise your brows. The artisans used cobalt oxide to tell stories through their drawings and inscriptions.

Be extra careful with this one because it’s a best seller with millions of reproductions.

Check for neat strokes on imperial porcelains because those are the highest qualities while you can ignore shabby lines on commoner items, Minyao. You can compare your Chinese Pottery with other verified items online or at a convention.

Hard Paste porcelain made from kaolin (clay) and alabaster didn’t start in China until 1710. Then 40 years later, around the 1950s, the Chinese artisans invented Bone China by mixing bone ash with ground stone and clay.

You won’t find antique Chinese Pottery in soft paste because that’s an English invention, so be careful when shopping.

No. While it’ll be simple to say yes and move on to the next question, antique Chinese porcelain marking isn’t so cut and dry. Instead of addressing these signs as Reign Marks, they’re Apocryphal Marks made by newer artisans to pay homage to the O.G. Porcelain makers.

What is the Most Copied Mark?

If you’ve been paying attention, you’d understand why these three imperial creations use the most Apocryphal marks. If you haven’t, don’t fret, we’d remind you, but you may want to scroll back up for a more detailed explanation.

Xuande, Chengua, and Qing-era porcelains had their reign marks inside the porcelain items instead of the typical base placements. So, artisans made apocryphal marks on the bottom when they noticed many collectors didn’t know of the different placements and wrongly assumed they were outright.

How Can I tell my Chinese Porcelain is an Antique?

You can employ the tips you learned in the Identification section of this article to determine the age of your Chinese Porcelain. The cardinal rule is that any item 100 years old and more qualifies as an antique, while 50+ years items fall under the Vintage category. Anything under 50 years of existence but older than 10 – 15 is a classic. We don’t make the rules.

How Do I Know the Value of my Chinese Pottery?

Special commission potteries addressed to the Emperor (Guanyao) are the highest-valued items. On the other hand, those made for commoners Minyao are the least valuable of the collections.

We recommend Gerald Davison’s The Handbook of Marks of Chinese Ceramics for detailed information on identifying Chinese Porcelain. It’ll set you back about $100, but it’ll be the best $100 you ever spend.

If you follow this guide closely, you won’t have any problems distinguishing an antique Chinese Pottery from a reproduction.

Just keep the following at your fingertips and you’re good to go;