Born of English Origins and still quite significant today, we have the Royal Doulton Figurines. Being here means you are a collector interested in the Henry Doulton figurines and Toby jugs characters from the 19th and 20th centuries.

We’ve gone to great lengths to bring a detailed guide on properly identifying and valuing them.

So, journey with us back in time and watch as we reveal how master handcrafters used terracotta and fine China that continues to shine through the ages to produce exquisite pieces.

What are Royal Doulton Figurines, and How Did they Become Popular?

So, what are these figurines, and how did they take over the spotlight?

The Royal Doulton figurines comprise a collection of detailed and precise hand-painted collectibles, jugs made from the highest quality bone china.

The company’s humble journey started in 1815 when Henry Doulton founded the Doulton pottery business, which focused on industrial stoneware.

It wasn’t until the 1820s, when John watts joined the business, that the company branched into the production of functional houseware.

With John Watts joining the business came the creation of the new name, Doulton and Watts. However, this wasn’t the only spectacular change that occurred as they also launched the Toby Jugs design that set the motion for the next phase of the Doulton and Watts company.

Come 1853; the company adopted the name Doulton and company as John’s son also merged his company with Doulton and Watts.

With the 1800s came the recognition that the Doulton company deserved as Queen Victoria, and the entire Royal family liked the pieces created by the Doulton.

She liked the pieces created so much that she dubbed Henry Doulton knighthood for his contributions to the England Ceramic Art.

However, this was not the only time Royalty smiled upon the Doulton Company. In 1901, King Edward the VII issued a Royal Warrant to the Daulton factory and bestowed it the right to be called the Royal Doulton.

There are more than 4000 royal Doulton figurines. These figurines have been divided into series, and we have the pleasure of introducing you to some of the most popular collections among royal Doulton collectors.

Introduced in 1913 and a jewel in the eyes of many royal Doulton collectors, we have the pretty ladies collection.

Next is the Dickens ware series, a series inspired by the characters from the Charles Dickens books. This collection of Royal Doulton collectibles are formed from fine bone china. Later models were created using earth clay.

From 1933, the BunnyKins series of Royal Daulton figurines flooded the market, and they were widely accepted by the young population of that decade. You’ll find that the most valuable of the BunnyKins had the Barbara Vernons Signature on them.

A look at the Breambly Hedge series will bring back the nostalgic feeling you’ll get if you read the pictures book from Jill Barklem.

This series comprises a licensed collection of children-themed plates, bowls, and mugs, and coincidentally, its release date coincides with the date the four-season storybooks were released.

Moving on, we have yet another series that is quite popular, and inspiration for the bone China figurines used was gotten from popular nursery rhymes.

The “Figures of Williamsburg” Series

The 1960s saw the launch of the Figures of Williamsburg series, and it was made so that it would coincide with the restoration of the Colonial Williamsburg Restoration.

How to Distinguish an Authentic Royal Doulton from an Imitation

You now know what Royal Doulton figurines are, their history, and how they gained prominence. We’ve also taken you on a journey to the more popular series. Now it’s time to educate you on ways you can identify an authentic.

You’re a collector; nothing feels more painful than spending good money on a fake piece of Royal Doulton Figurine.

So, to ensure that you end up with a genuine piece, you’ll need to check the Backstamp, name, and identification number of the figurine. In addition to this, some also feature the artist’s initials at the bottom, the company’s logo. Let’s explore these different methods of identifying a genuine Royal Doulton.

The Backstamp has a Lot to Say

One sure way to identify an authentic Royal Daulton figurine is by examining the backstamp. The Doulton backstamp on the bottom of the figurine would usually be over the figurine’s name.

Depending on the figurine’s era, you should also find an HN identification number. “HN” stands for Harry Nixon, a prolific Daulton artist. From 1913-1940, the HN number followed a sequence after which the HN number was to be assigned based on the modeler of the figurine.

Antique marks give a little trick to tracking the exact date of manufacture of these antique figurines. All you have to do is add 27 to the barely visible small number located at the right of the stamp.

Get Assistance from Experts

Another sure way to ensure that the royal Doulton figurine you have your eyes on is the real deal is by engaging the services of antique experts. Several local and on the “Antiques Roadshow” appraisers are willing to offer their services for free.

However, it would be better to contact famous auction houses like Bonhams and even Christies. They will give their unofficial opinion by taking a good look at a photograph of the Doulton figurine.

Counterfeiters today have found several ways to pass off a fake Royal Doulton as the real deal. Here are some things to be on the lookout for

So, you’ll be able to spot a fake easily since you can find the correct measurement of any Royal Daulton figurines on several value guides.

Counterfeiters also use inferior materials to create fake figurines. Since these materials are inferior, they won’t shrink when placed in the fake mold; however, you’ll notice that their base will remain unpainted, which won’t match the real thing.

Altering the Color Schemes and Paint

Fakes also tend to have a brighter color finish than an original figurine would have. The paint will be uneven, and the garments, eye details, and other details might be missing.

These counterfeiters also try to pass regular original pieces as rare ones by revising some features of an original. They can even choose to remove the color from an original to look like an unfinished piece. Unfinished pieces are highly desirable by collectors.

How to Properly Value a Royal Doulton

Knowing how to properly value the Royal Doulton figurines and character jugs is an invaluable skill you’ll need as collectors of these antiques.

You’ll be able to tell apart how much value to place on a regular piece and not make the error of giving away a unique one for this price of a regular.

Engage the Services of a Professional Antique Valuer

To properly value your Royal Doulton figurine, you should engage the services of a professional antique valuer. They can determine the value of your antique by investigating factors like;

The age of the piece is one sure way that valuers use to determine the value of your Royal Doulton figurine.

Older figurines have lower production runs, and some of them are limited edition items, so they have a higher value than more modern models and those that are not rare.

Figurines that are still in excellent condition will be of higher value than other figurines of the same badly used model. Wear, chips and cracks will surely deplete the value of any antique.

Visible markings may also increase the value of a Royal Doulton figurine, especially potted marking visible in figurines made before 1939.

The artist who made the figurine will also greatly affect the value of a Royal Doulton figurine. Typical examples of popular artists that worked under Harry Nixon include; Pheobe Stabler, CJ Noke, Peggy Davies, Tim Potts, and Charles Vyse, to mention a few.

The Theme and Color

The theme and color of some figurines also spell higher value for them. Typical examples of this are the pretty ladies collection from 1913. The swirling dresses and vibrant colors have somehow managed to steal the heart of collectors worldwide.

Another good way to ensure that you get the best price for your Doulton figurine is by researching the price. A reputable price guide will have three major qualities: the price guide must be very recent. It should not be older than 5 years.

Secondly, you also need to ensure that the prices are conversant across several contributors. We understand that not all contributors will agree, but a good number of them should agree on the same price.

Finally, you also want to make sure that supporting calculations confirm that the prices stated aren’t just conjured up by the contributor for every price guide.

Here we’ll do you the pleasure of displaying some popular Royal Doulton figurine pieces, their estimated prices, manufacture date, and of course, their HN number. 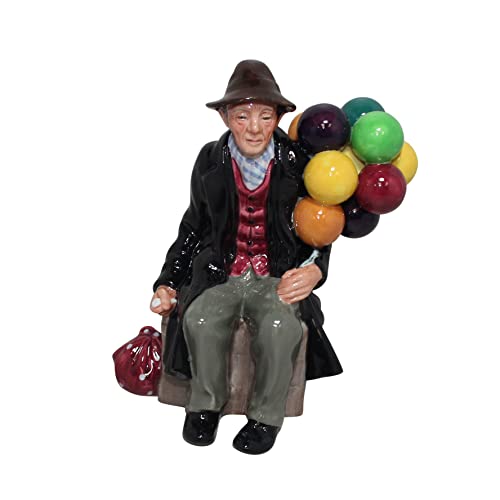 We know finding authentic figurines can be a bit of a hassle; that’s why we’ve also taken it upon ourselves to reveal to you the best places to get the real deal. Here are exceptional places where we are quite sure you’ll get authentic Royal Doulton figurines

When searching for antique Royal Doulton figurines, your first stop should be estate sales near you.

Ensure that the estate sale is professionally managed, and you’ll be sure to find coveted collectibles you came in search of. These treasure hunts for Royal Doulton figurines are something to live for.

Your next stop should be specialty retail stores that stock up on revered collectibles. You’ll be surprised to find out that these shop owners are usually blessed with donations from homeowners and estate liquidators. Do not forget to check a high-end thrift store.

Auction venues are another good place to find rare collectibles like Royal Doulton figurines. Before attending the auction, ensure you find items available to auction beforehand.

The online market is a vast world, and it sure does contain its bit of rare collectibles. Online market places like Etsy, ruby lane, seawaychina, and eBay have several Royal Doulton owners willing to sell their pieces for a price.

Q: How Much Will a Typical Royal Doulton Figurine Cost?

A: Generally, the cost of a typical Royal Doulton figurine range within a few hundred dollars. The cost will be dependent on the condition of the figurine, the rarity, and the age.

Q: What is the Most Valuable Royal Doulton Figurines?

Q: How to Search for the Price of a Royal Doulton figurine?

A: Learning how to search for the price is also as crucial as knowing price guide sites to trust. First, you need to ensure that the piece in your arsenal has a patent number or model number that will help identify. Once you have this number, simply input it in the search bar of your preferred search engine, and you will find useful information about the price of the figurine.

A: The manufacture of character jugs and mugs came to a halt in 2011. However, there are a lot of Royal Doulton Toby jugs and mugs and character mugs still around today. So you can still get your hands on one of the real deals. You’ll however be pleased to know that the company is still in operation till today.

Q: Is Royal Doulton still made in England?

A: Although initially made in England, many of today’s Royal Doulton figurines are from Indonesia. This, however, does not mean that the England Waterford Wedgwood in Barlaston location is not in operation. Instead, production here is focused on higher-quality items.

We are sure we’ve armed you with all you need to identify and value a Royal Doulton figurine. So, on your next antique expedition, be it online or the real world, you can be sure you’ll not get ripped off. The Royal Doulton figurine and Tobys jugs appeal to many antique collectors worldwide. However, do remember the following;