If you’re a stoneware collector then you’ve probably heard of or have a Robinson Ransbottom pot, pan, or crock laying on your antique shelf. These masterpieces were “hotcakes” from the early 20th century down to the early 2000s. As they were well-handcrafted and heavily mass-produced to meet the large demand of most American households.

Robinson Ransbottom Pottery offered everything! As they produced a large variety of blue cobalt designed stoneware that stretches from regular tableware to artworks, and trivial products such as churns, crock… etc.

There is more to know about Robinson Ransbottom Pottery Co. history, Value, and marks. Read on as we delve in…

It all started in 1900, as Frank Ransbottom founded the Pottery company along with his brother in Roseville, Ohio. Which was the best location for the business. Roseville was the Hotspot for top-quality stoneware at this time (19th and 20th century).

The company grew and peaked in 1916. Ransbottom’s stoneware was popular enough and the company could provide top-quality products for quite a large customer base. Some years later, Frank Robinson decided the Pottery company was Ripe enough to merge with his brick and tile company known as Robinson clay products Co.

This occurred in 1920. It was at this point that Frank Ransbottom decided to expand his company’s product line, from regular functional goods such as tableware to garden ware and art pottery. Apart from a change in inventory, there was a change in name during this period. As Frank’s company was officially named Robinson Ransbottom Pottery Co.

How To Identify Your Stoneware

Every stoneware or Pottery should have clues that allow you to identify where and when it was made. The clues are known to be the maker’s mark or the company’s signature. It may be in the form of company initials. For instance, R. R. P. Co. (Robinson Ransbottom Pottery company). Or it could be in the form of an image to which in the case of Robinson Ransbottom Pottery is a blue crown.

Company initials: These are usually located directly under the stoneware or Pottery. Along with where it was made.

Sidewall Stamp: Instead of marking the bottom of the crock, certain companies prefer to mark the side with stamps. A good example is Red Wing stoneware and Robinson Ransbottom Pottery as well.

Note: the way the number is placed on the crock is another way to identify the maker.

How Can You Tell The Age Of Pottery?

Way before the end of the American Revolution in 1783, Stonewares were mainly imported into the country with no or minimal domestic production. Post-revolution led to the boom of the stoneware industry domestically. However, their uniqueness was quite non-existent from the 18th century down to the early 19th century.

It was in the late 19th century that uniqueness started to matter. As manufacturers or companies would make use of signs and designs that enables customers to distinguish one make from the other.

Here are various signs that determine when your stoneware was made:

If your stoneware appears to have imperfections such as bulges in its overall shape or slight errors in the designs, then you’ve hit the jackpot. As such stonewares or potteries were common from the 18th century till the late 19th century. Where most Pottery or stoneware production was more or less automated.

For instance, instead of hand-crafted designs on the stoneware, they’re usually printed upon the product.

Stoneware or Pottery without manufacturer’s mark or pattern name at the bottom is relics. As such products are most likely made before the 1800s. Why? Because companies placing a mark on their products wasn’t a thing until 1810.

Ever since the enactment of the first limited liability law. New York, 1811, many companies adjusted the official names. Thus giving rise to the presence of the word “limited” written at the bottom of the product. So your stoneware or Pottery was probably made during the mid 17th century (starting from 1861).

The practice of companies placing the made-in sign on their product stemmed from the Brits trying to ward off cheap imitations of their products. This practice started in 1887 but every other country practiced this in the early 1900s. Which is when your stoneware with the “made in” mark is most likely made.

Salt glazers weren’t used to make stoneware or Pottery until the late 16th century. If yours is without such, then it’s most likely made well before 1775.

How To Identify Robinson Ransbottom Stoneware 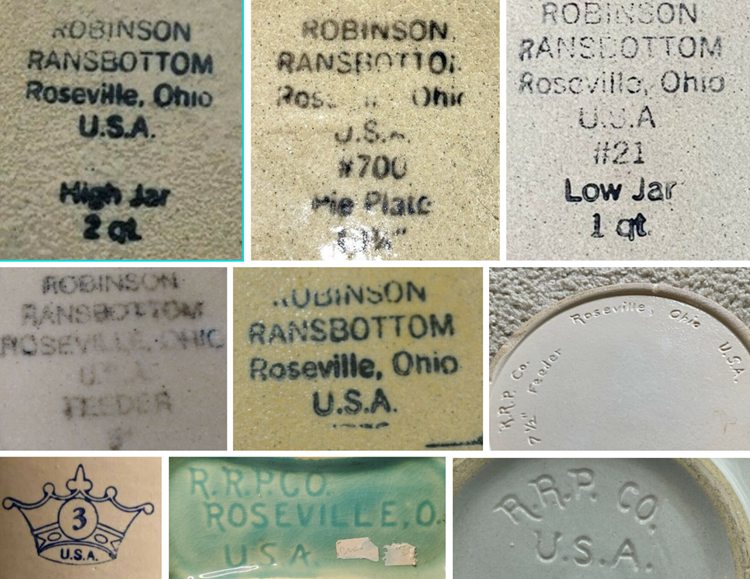 Now that you’re able to identify when and who designed your stoneware, let’s take a look at Robinson Ransbottom Stoneware.

Logo: Robinson Ransbottom made use of a cobalt blue crown logo with a number at its center that indicates the capacity of the stoneware. Also, sometimes the logo is ingrained into the surface of the stoneware.

Color: Robinson Ransbottom Pottery or stoneware usually has that blue cobalt blue hue. The color is more of a theme for their brand, as one liken a blue spongeware mixer or crock to the company. However, R. R. P. stoneware did come in other colors. Such as yellow, brown, and green.

Markings: underneath a Robinson Ransbottom Stoneware or crock is a crude marking that reads “R. R. P. Co”. Along with the location that indicates where it’s made (Roseville, Ohio). Followed by a serial or product number.

Note: sometimes the markings could be informed of a stamp. Or ingrained underneath the stoneware.

How old is your Robinson Ransbottom Pottery?

Does it appear crude?

During the early 1900s or late 1800s, Pottery or stoneware making was strictly done with hands by loads of employees looking to work as effectively and fast as possible. However, due to human error, there will be stoneware or Pottery that may be poorly done or almost perfect as the ideal sample that was shown to the Potter. Thus giving the rise to crude-looking stoneware.

It’s during the late 1900s and 2000’s that Robinson Ransbottom Stoneware was a lot less crude. Due to improved and somewhat perfect technique for crafting stoneware.

You can get evidence from the way the stoneware is marked. For instance, the marking underneath the piece could appear crude (like it was roughly marked before it was baked). This is a clear sign that the stoneware was made during the early 1900s. But if the markings are well defined (as though a metal stamp had been used to leave a permanent mark) then it was probably made towards the 21st century.

Another type of marking to look out for is the regular ink stamp underneath the stoneware. This type of stamp was also popular around the early 1900s.

How To Distinguish Between Antique And Modern Robinson Ransbottom Stoneware Reproductions

If the stoneware happens to be folding into itself (the center) then it means the walls were too thick (heavy). Such a feature indicates the piece was handcrafted. Which was quite common in the early 1900s.

Very old stoneware usually possesses simple paintings such as numbers, animals, and plants which appear to be done directly by hand. However, modern reproductions usually have designs, numbers, or paintings printed or stamped upon them. The same can be said about the numbers on the stoneware.

Modern reproductions tend to be less indistinguishable because they’re being mass-produced. The handcrafted antiques on the other hand tend to have unique markings. Especially if it’s an art piece as the artist will leave out his/her signature.

Ways To Fish-out Markings From Your Stoneware

Is Robinson Ransbottom Pottery Worth Anything?

Getting the right price for your antique piece can be tricky. But the key question to keep in mind is “How do you satisfy the stoneware collector?” and the follow-up question should be “what do they want in an Antique piece?”. Various factors can answer that question. They’re as follows:

Bigger stoneware pieces are usually in high demand due to their rarity. For instance, larger crocks or butter churns with more capacity are a lot harder these days due to their high fragility. This is why they tend to cost more in a pawn shop or an auction.

The design of the stoneware plays a huge role in its pricing. For instance, the design on the piece may be simple (with plain simple images of plants or animals) or complex. The complex design will attract a higher price. But only if the design was done before the piece was baked. Otherwise, it may even lose its value. As designs added after baking the stoneware or above the glaze is deemed “unoriginal” (it’s like painting over a painting).

Apart from the design, the maker of the stoneware affects the price greatly. So if the manufacturer is well-renowned, the price of its piece will get higher. If not, the price might plummet. But one thing’s for sure is that the piece made by a renowned manufacturer is more likely to attract a huge price in an auction of the less popular or less successful manufacturer.

This fact goes hand in hand with the manufacturer, as color is also a means of identification. For instance, Robinson Ransbottom Pottery Co. Are famous for their Cobalt Blue designs.

A crock or any stoneware made by a company that has its company markings has its price. But a crock made by a well-known artist tends to attract a higher price.

Your antique piece must be complete. As no lid, handle, or any part should be missing if you seek to sell at full price.

Robinson Ransbottom Pottery Co. Was one of the top-tier stoneware companies in America. As they offered various stoneware pieces during the golden Era of Pottery use. Right now those pieces are valuable relics that are up on the list of every ambitious stoneware collector we have today. As it checkouts in terms of certain factors which include the following:

With the tips and information provided, it should be a lot easier to price any of the relics manufactured by Robinson Ransbottom Pottery Co. And other brands as well.