Carnival glass is an antique, stunningly beautiful item with an iridescent glaze and an endless variety of colors. It is a famous collector’s item that used to be given away for free. Recently, a single piece of carnival glass was worth about #40-$50. Some are worth hundreds of dollars, while others are worth as much as thousands of dollars, especially if it costs a lot to purchase.

We’ll see a few of the most valuable carnival glasses and their worths later in this article.

What is Carnival Glass?

Carnival glass is molded or pressed Glass that has an iridescent shimmer on its surface. It was usually referred to as rainbow glass, dope glass, taffeta glass, aurora glass, and disparagingly as poor man’s tiffany. Eventually, this item was given its name carnival glass by antique collectors in 1950 because it was given as prizes at carnivals, fetes, and fairgrounds.

Evidence shows that these glasses were purchased by a particular set of households, mainly to brighten their homes when the well-off could afford bright electric lighting. It was said it helps catch light in the house’s dark corners. The U.S primarily mass-produced Carnival glasses at the beginning of the twentieth century.

These producers used a wide range of colors, color combinations, and especially scarcely used colors. Most times, the barely used colors command a high price when sold at that age.

How to Identify a Carnival Glass

Carnival bottles are known to have an iridescent shimmer. So the first thing to do when identifying a carnival glass is to look for the iridescent rainbow effect on the body of the Glass.

The base of the Glass 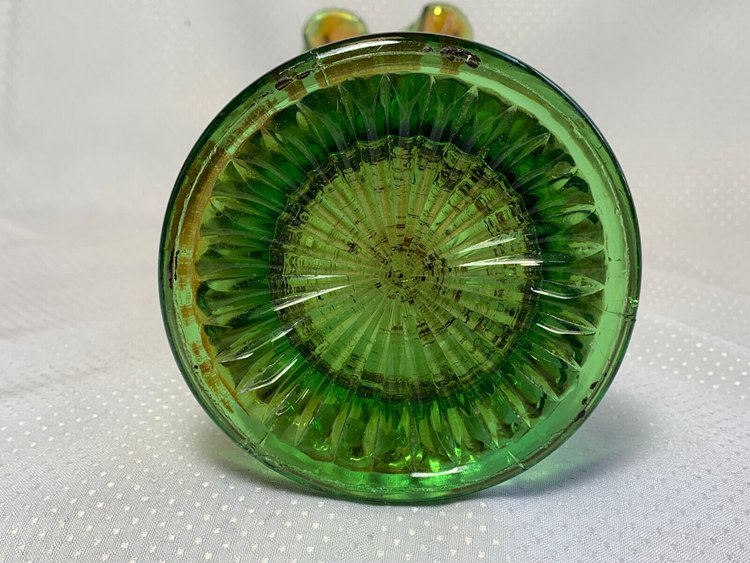 Another way to identify a carnival glass is by checking the base of the Glass. The bottom of the Glass is usually not weighty or thick. It also doesn’t have an iridescent shimmer. So look at the base to see if it isn’t thick and spend a pearlescent shimmer.

The carnival glass is made from metallic oxide. Being a metal, it is liable to get rusty the older it gets due to many reactions that may occur as the glass ages.

What is the Rarest Colour of Carnival Glass?

Carnival glass was produced in different colors, some were plain, and others were combinations of colors. The standard colors were white milk glass( also called vintage milk glass), deep black and purple, blues, vivid reds, pastels, and green.

The reason for many beautiful colors is that all the manufacturers always wanted to outdo one another with new and fantastic color combinations. It turns out that there is still a class of colors that are very and, in turn, the most valuable set, and they are:

The Value of a Carnival Glass

Carnival glasses were given to people by the vendors as prizes back in the days during carnival, which is why it is called carnival glass. This isn’t the case anymore in recent times because collectors pay a lot of money to acquire or collect these glasses. Even glasses with standard color and pattern have an excellent worth. Retailers, just like carnival glass, sell some pieces in the range of $35 to $85.

The glasses in this range are usually small pieces such as small vases, serving pieces, bowls, and plates. On the other hand, a rare11 inch bowl made in Dugan’s farmyard pattern was sold on eBay for more than $3,800. It was in good shape and was very good to use. Several factors determine the value of carnival glass, such as the functionality of the item that was made with the Glass, size of the Glass, color, age, and pattern.

Generally, Antique carnival glasses are beautiful and great for decorative and household use, hence their high worth. Some Carnivals glasses are very rare, which automatically makes them very valuable, and a few of them are:

This is the most valuable and rarest carnival glass ever produced and sold. The complexity is unrivaled. Millersburg Glass owner John Fenton created the people’s vase.

This is one of ten pieces he created for the Dutch royal family in 1910. The vases were made in tribute to Queen Wilhelmina. Fenton created this vase with people dancing to celebrate the queen’s new baby, who would later become the queen herself.

This unique green vase was manufactured from a water pitcher mold but lacked handles. It was sold for $140,000 in 2018. Harry Northwood, the well-known glass specialist, created some of the most magnificent glass vases in his Indiana, Pennsylvania, plant. 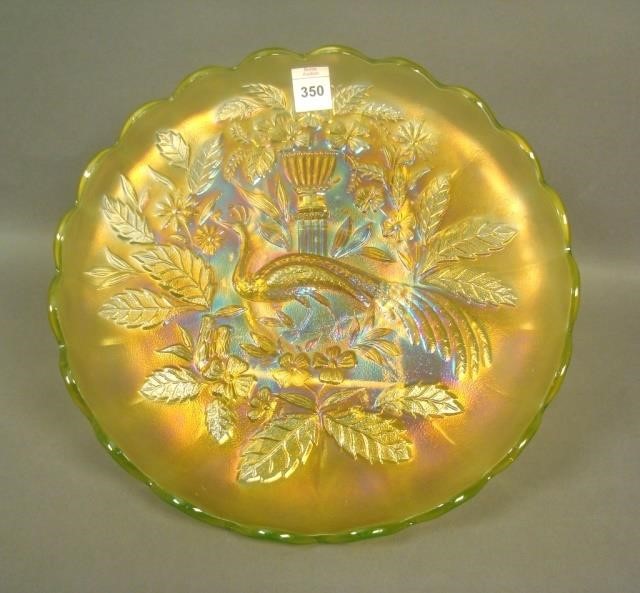 This molded glass bowl was made between the years 1900 and 1919. It measures 101/4 inches and has a frosty appearance when placed near light. The bowl has a bright yellow base with an iridescent finish.

This bowl illuminates the entire room when darkness falls, as many did in the early days of carnival glass. This is the second of its kind, according to experts. This bowl was worth $66,000.

The Tornado carnival glass is scarce. It has a tricorn top that is flared and iridescent. It sold for $60,000 at the Karen Engel auction in 2017. Since it was produced, only a few people have owned it: George Loescher, George Thomas, Dale Matheny, and Karen Engel.

This carnival glass was made to commemorate the centennial of Cleveland, Ohio, which was established in 1776. It honors five of Cleveland’s architectural marvels from the time.

They have depicted in the ashtray’s center and its four corners. This is a scarce find, and any collector who knows his trade and comes across it knows he’s struck gold. 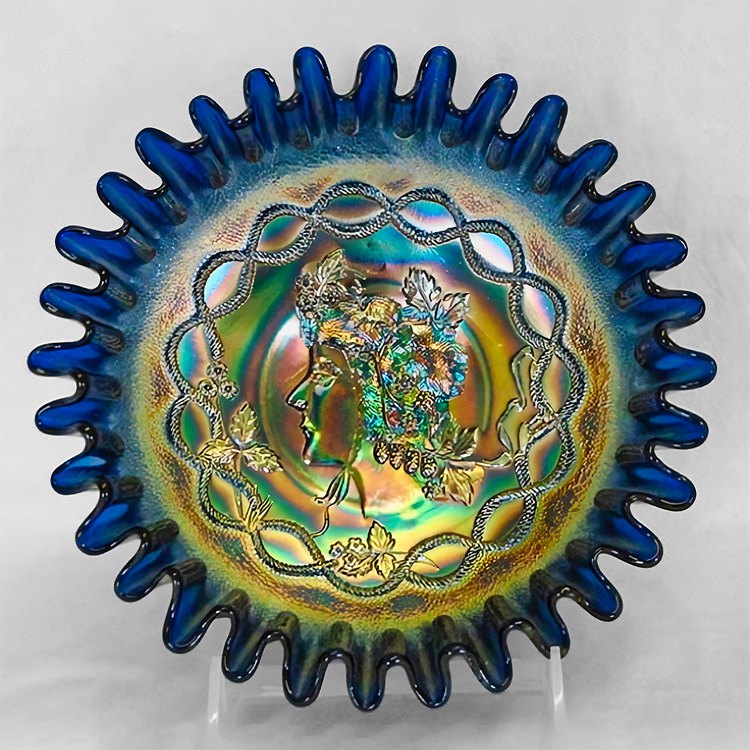 This bowl, another rare find, exhibits intricate artistry. The details are so smooth and proportionate that you can’t resist but appreciate the maker’s creative abilities.

It represents the head of a goddess in the center of the bowl, with what appears to be a flower wreath ring around the head. The goddess herself is crowned with flowers on her head. It was listed for $52,500. 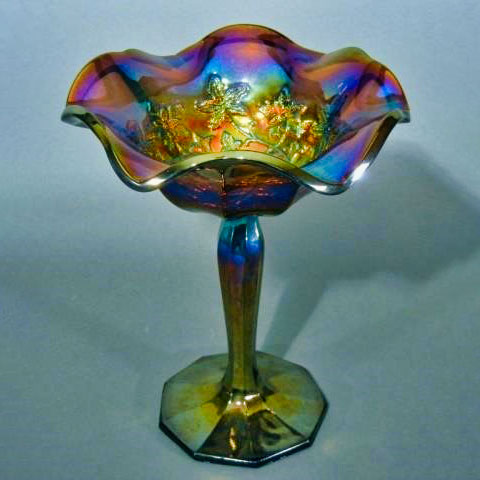 This rare carnival glass, like many others, is one of only a few of its kind. When it went up for auction at $50,000, it was an auctioneer’s dream. 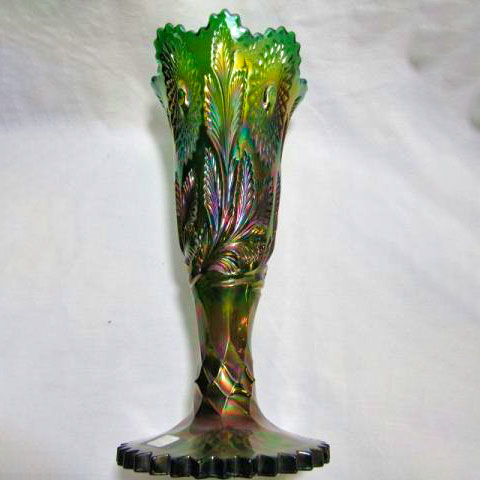 Consider a beautiful green seaweed frozen in the sea’s waves. But it’s made of Glass. That’s how this carnival glass appears to me. Any collector would give anything to have this on their shelf. And now that you have it, you’d never want to sell it. This is where antiques derive their value.

According to a few sources, this is the only known green Millersburge vase in this design. It was auctioned off for $50,000. 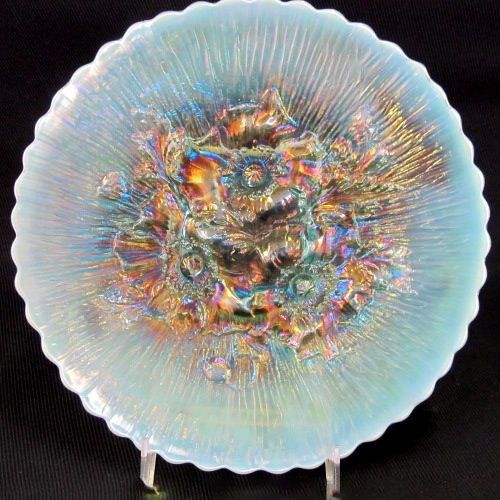 This carnival glass has an almost ethereal appearance. It is a rare glass with a design in the middle that resembles bursting lava mixed with various flowers and colors. The plate was auctioned off for $45,000. 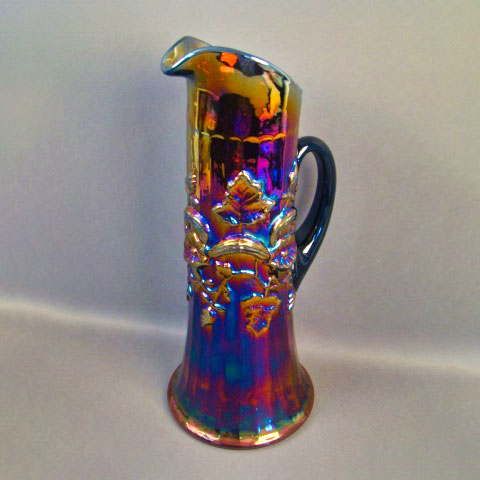 With all of the intricate design, it couldn’t be a regular pitcher. No one wanted to serve tea from this carnival glass pitcher at breakfast. They are so rare and beautiful that some collectors have them on display in their homes.

This one is completed in amethyst with floral embroidery on the midsection. It has a wide handle in deep blue. This extremely rare Millersburge pitcher will brighten any home or museum. It went for $42,000.

This carnival glass is one of the most sought-after glasses. It has six ruffles and beaded steel wheels and is made of amethyst. The outside features a jeweled heart design. It went for $2,100.

These are early twentieth-century vases. The vases stand 18.5 inches tall and are amethyst in color. They are molded like elephant feet, with a thick bottom and a tapered middle to a flared top. Both of these stunning pieces were sold for $1,750.

This is a piece of ephemera to be collected. “Gerurtz Brothers Furniture & Clothing. Union Ave & East Burnside.” read the carnival glass plate.

The piece is a prized collectible for anyone who enjoys carnival glass and advertising.

This unusual pattern of amethyst glass is incredibly ornate and deeply colored. The chalice, which stands about 10 inches tall, is strewn with berries, leaves, and stems.

Millersburg, Northwood, and Fenton did not produce all carnival glass. Imperial created this electric purple plate.

It has an unusual design: a priestly setting with an exquisitely influenced border.

This bowl looks like a wicker basket filled with flowers, with a serrated edge and matte glaze. It is an excellent example of Northwood’s aesthetic and the “electric blue” color, which is just a tad brighter than dark cobalt.

It’s green, iridescent, and has pie crust edges, and it’s signed with the title character N-in-circle signature that Northwood glasses are famous for. Although it is not the most valuable Glass on this list, it is far more precious than most of the Glass available. It is also uncommon. It was sold for $45,000.

The Thumbprint, one of Fenton’s works, is unique. It is available in plum opalescence, with a ruffled rim bowl and three jack-in-the-pulpit vases. It was created in the late twentieth century. It was sold for $702.

This water set has one of the most beautiful carnival glasses in the world. It was produced between the years of 1920 and 1929. It is iridescent, from the pitcher’s tip to the bottom, where the Northwood signature is. It is valued at $549.

Where Can I Sell Carnival Glass?

Collectors are constantly on the lookout for antiques to purchase. They scour the internet for discoveries. Your carnival glass can be sold in the following ways:

You can sell it online by listing it on antique-specific online marketplaces. There are several of them, such as eBay and Etsy. You can sell your carnival glass in whole or in pieces.

You can sell at your local auction house if there is no one in your area. It is one of the simplest methods to market your carnival glass and receive payment almost immediately.

Sell to Collectors and Individuals

You can sell carnival glasses to individuals or dealers. It may not be as simple unless you know how and where to contact collectors. It is, however, one of the simplest ways to sell your carnival glass.