So you’ve found yourself some nice-looking figurines in your old storage room or at your local antique store, and you’re wondering “how much would they go for?” From recent sales in online stores and popular auction sales, you should be able to get hundreds or even several thousands of dollars for antique figurines.

However, determining whether those figurines are worth that amount can be tricky.

Because the market for Antique figurines is one of the most unpredictable, as requirements for each buying collector vary greatly, the reason for buying could hinge on certain factors. Such as the design of the figurine, its manufacturer, age, and several more factors.

They were present during World War II when the Allies occupied Japan from 1947 to 1951. Its figurine pieces have a unique design that can offer a vintage appeal in any setting. Most of their pieces are cheap in the antique market and can go for several hundreds of dollars or maybe a few thousand.

This company was present during the early 18th century and is famous for manufacturing attractive figurines with intricate designs.

Their figurines are famous in the 18th century for the flatback design that enables them to rest easily or hang next to walls. Most of their figures imitate dogs and humans, which can fetch you several thousand dollars in today’s antique market. However, beware of forgeries and reproductions.

Royal Dolton pieces came into the market in the early 1900s. They are famous for their use of colors and impressive figurine designs. Most of their figurines or renowned collections are fashionable women of various colors. Whereby the rarity stems from a distinctive color. Such a factor for this particular brand could be the difference between making a few hundred dollars or several thousands of dollars.

Dresden lace is famous for its artistry which involves dipping actual lace into slip clay. Such a design requires more effort and care to make. This feature is why Dresden lace figurines can cost so much, as the lace constitutes a big part of its value.

It is a German porcelain factory established in the 18th century. They are famous for their human and animal imitations and unique Vatican pieces.

10 Most Valuable Antique Figurines Worth a Fortune

It is one of Dresden lace’s unique figurines, consisting of an impressive ceramic lace imitation of a ceramic ballerina. Also, the piece is in good condition. All crucial parts, such as the fingers and hair, are intact. Except for some part of her lace skirt, which has crumbled. 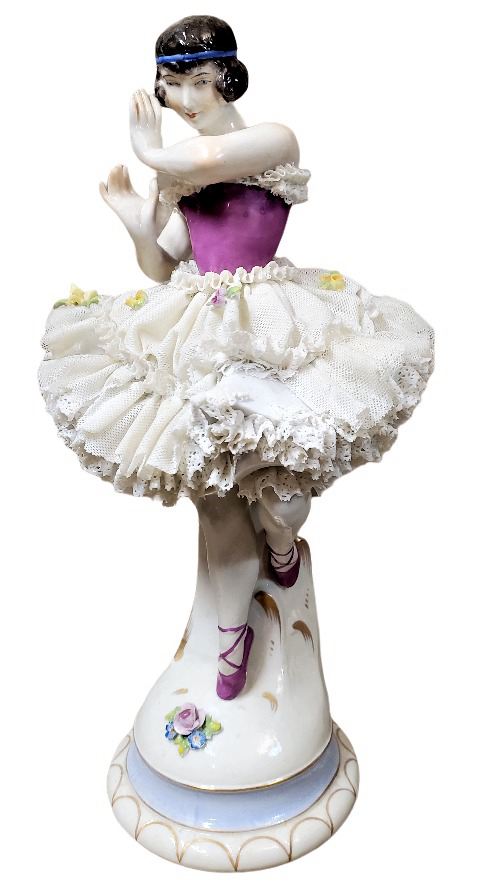 Here’s another Dresden lace special. However, this piece consists of multiple figures (two fashionable women and a gentleman). This piece also comes with a lamp that makes the overall piece a lovely ornament that works almost anywhere. 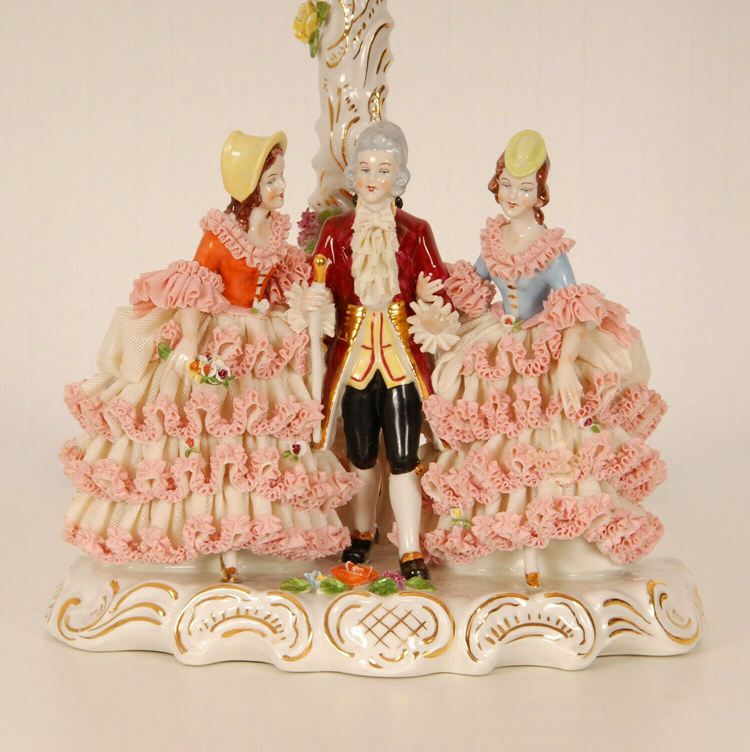 It is also another porcelain Dresden lace piece that consists of many figures in one piece. It depicts a party or a group of dandy-dressed men and women enjoying a musical performance. Also, this piece is quite large. 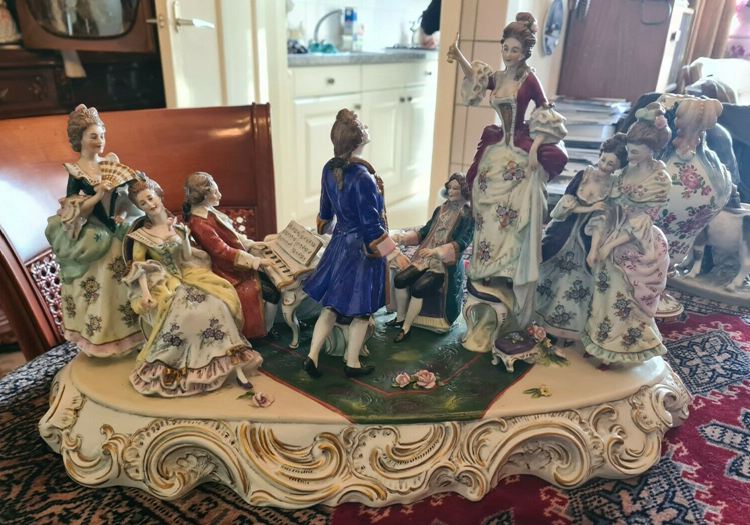 These are twin Meissen figurines that imitate two cherubs. One of them is covered in pink, while the other is black. The one in pink also has some floral designs. 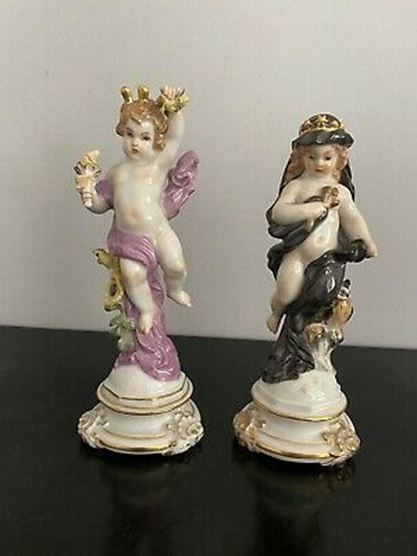 This figurine piece consists of four cherubs surrounding a fireplace. Dressed in purple, lilac, and yellow loins. It’s free of cracks and chips and has fewer retouched spots. 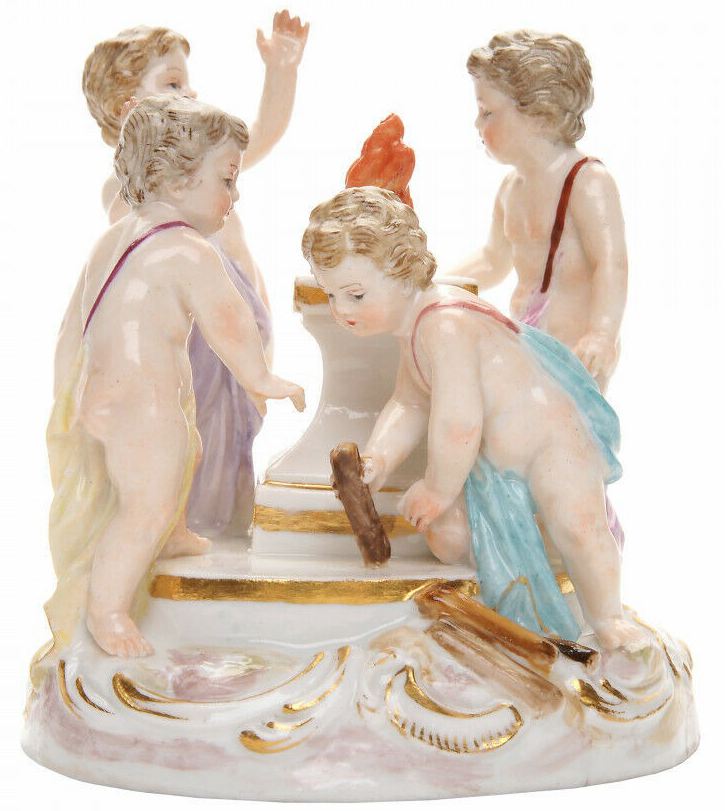 Here’s another Meissen figurine, but it imitates a bird instead of humanoid figures. The design and colors of the bird make it appear life-like from a good angle. Overall the piece is excellent, with little to no cracks, chipped parts, or discoloration. 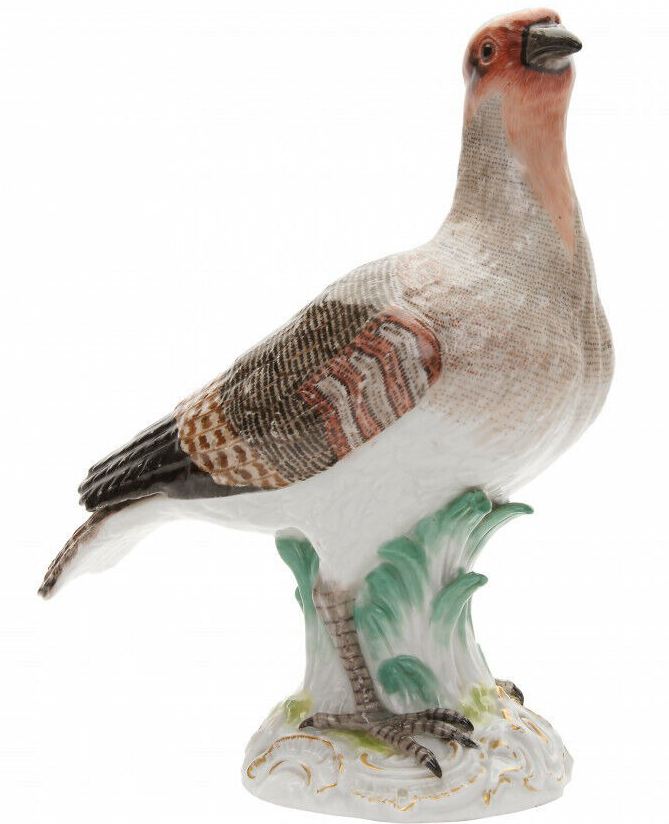 It is a royal Doulton figurine that imitates a king (good king Wenceslas) with his belts, scrolls, sword, and lantern. It has a mold number (3262), indicating it is a 1952 piece. The figurine is one of the well-known artist’s works known as Peggy Davis. 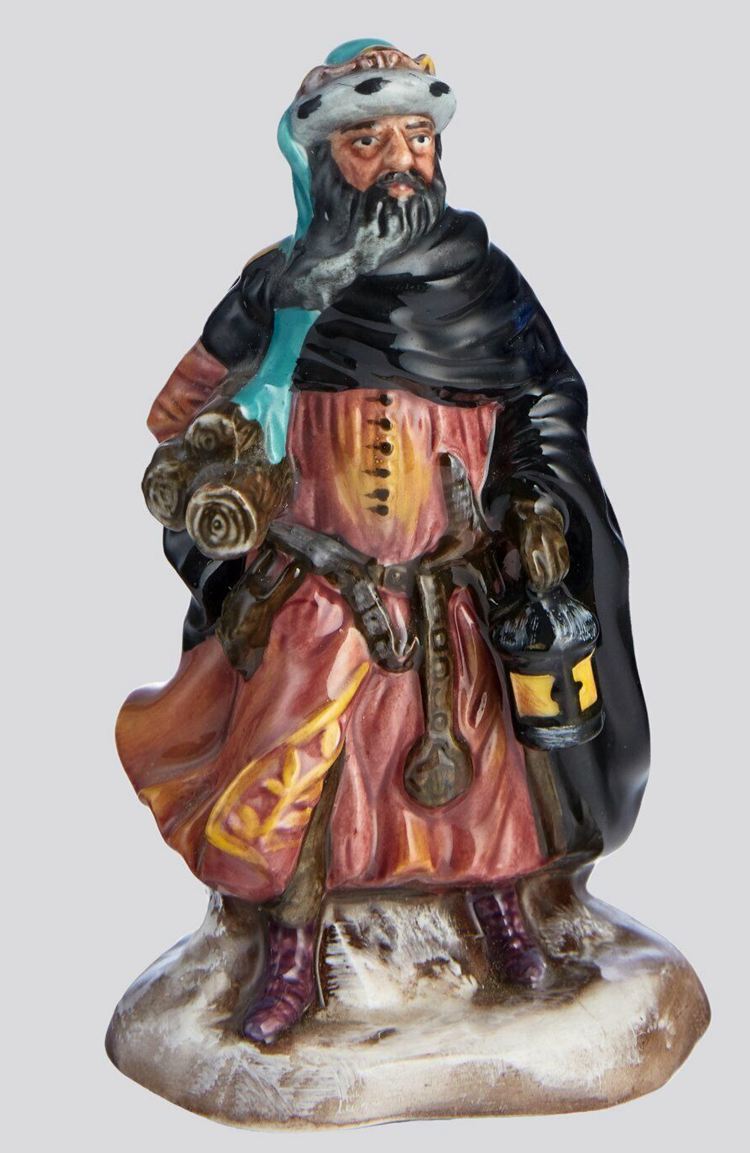 Here’s a rare Staffordshire pair of dalmatian dogs, each dot on a brown base. And they possess a black collar and chain. Also, this piece is from the 19th century, and it remains in good condition. 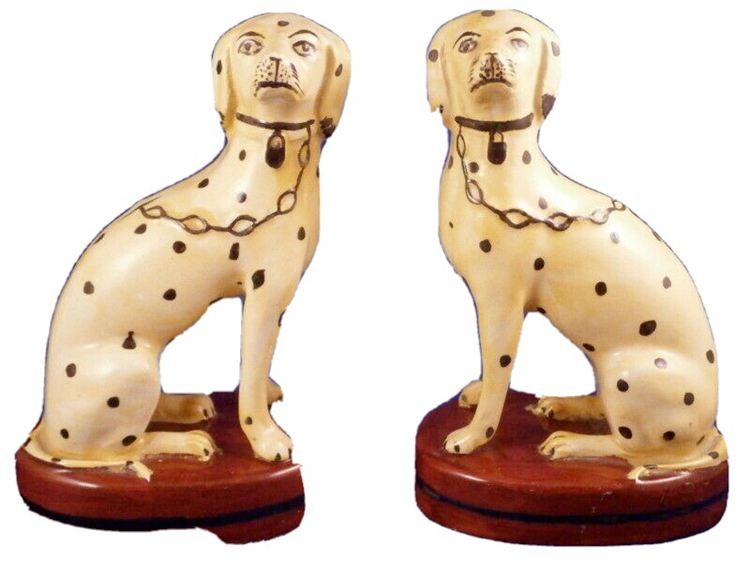 2. Vintage Lot of 16 Figurines Made in Occupied Japan Measures 2-5 inches

These are Victorian-era figurines made in the mid-20th century in occupied Japan during World War Two. Thus making them vintage pieces instead of antiques. 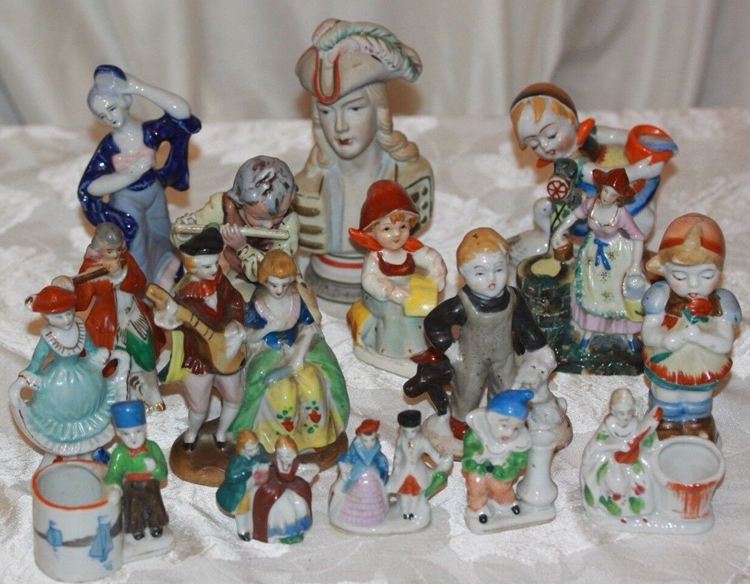 This pair consists of two individual goat figurines which appear as though they’re playing together when placed next to each other. Another impressive detail of this pair is the green grass base that supports them. It is also a vintage piece that’s probably from 1947 to 1976. 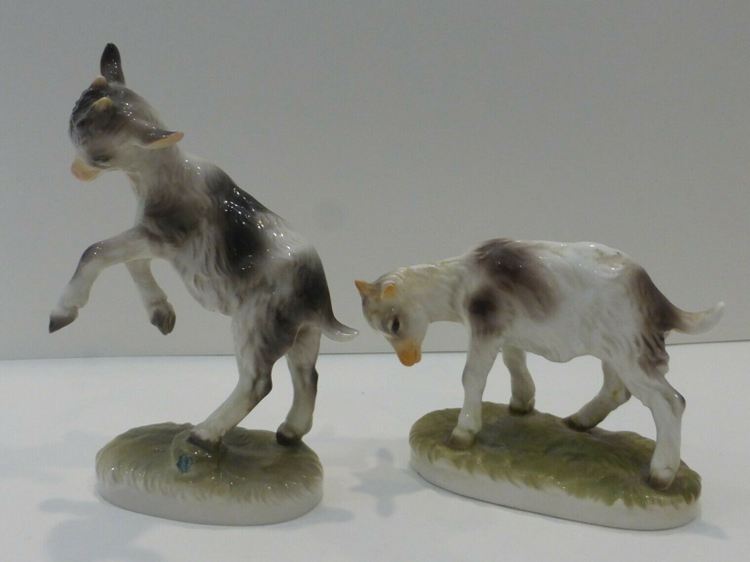 What makes an antique figurine valuable?

The age of the figurine or collection in question places a huge role in its pricing in today’s antique market. Usually, the method for production of such products was a lot cruder. However, finding the necessary evidence to confirm the age of your figurine piece can be a bit tricky, especially if it’s a pre-industrial era piece that probably doesn’t have its maker’s mark.

The easiest but “not so” foolproof method you can adopt is by visually examining the pieces for any evidence of crudeness. Most figurine pieces made far before the industrial era were usually hand-crafted.

Another way you can tell the age of your antique figurine is the style of the figures made. For instance, around the 16th-century, companies or artists began to craft figurines that would imitate humans (such as masked Italian Commedia dell’Arte performers) and animals. British manufacturers did the same around the 18th century. Works such as subjects of British monarchy being or depictions of rural life (like farm animals) were quite famous.

Another factor that can affect the value of your figurine is signs of repair or any false claim that the piece is free of damage. How do you detect such? You can make use of a regular touch light in a dark room to examine your figurine piece for non-obvious cracks and crazing.

Sometimes the figurine piece could even have signs of retouches or repaints, which is unattractive to buying collectors. You should use black lights to detect such, as they would reveal any sign of repaints, with that part of the porcelain figurine glowing.

Black lights are also helpful in detecting signs of glue, as they would glow as well.

Note: some figurine pieces will show signs of professional repair. Despite this, they remain precious. However, its value still depends on the preference of the buyer.

Apart from all the claims, there must be signs or Markings on your antique figurines that confirm they’re authentic. For instance, you can use the symbols or Markings on your porcelain figurine to authenticate its age. And such is done by examining the style and design of the manufacturer’s mark. This factor is quite crucial for tracing its date of manufacture.

How To Trace The Era Of Your Antique Figurine:

The size of the figurine is also a factor that can affect the value of your antique figure. For instance, there are specific figurines of the same design, but they come in different sizes. This type of diversity only breeds rarity, as some figures of a particular measure would be scarce (be it a larger one or a smaller one).

Multiple figurine pieces are tough to make. And it takes a lot of the craftsman’s effort to design. Because every subject or figure in the design should be well-positioned to give the illusion they’re all interacting. Examples of multiple figurine pieces are depicting the birth of Jesus Christ in the manger with his parents and the three wise men nearby. Or a figure consisting of a Shepherd with his sheep or an angel striking a demon.

The material of your antique figurine also affects its value. Because buying collectors may have preferences that require a specific figure material. Most likely to complete a high-value collection. The types of figurine materials in circulation include:

Note: the most common material is porcelain. However, if the figurine material is rare, then it can hold a lot of value.

Sometimes the figurine in question does not always need a particular mold number or manufacturer marking to be high value. It could all be down to one factor, Aesthetics, as collectors could place just a bit more value in a beautiful piece and offer ornamental value instead of a figurine that looks tattered and is probably rare.

How To Tell How Much Your Antique Figurines Are Worth

However, there are not-so-common cases where collectors still pay an excellent price for slightly disfigured figurine pieces, usually because they must be ultra-rare (like commemorative figurines).

Your figurine’s rarity could also stem from its features, such as its size, as a giant or smaller version of a particular figurine design could be rare. Another form of a rarity in your figurine could be the reason for manufacturing, as there are limited numbers of figurines made to commemorate an event.

There are unique figurines that famous artists make. You can find them mostly in top brands for figures, as artists could be in charge of designing a particular collection. Such figurines are bound to be rare.

Note: This is a common practice by brands to create uniqueness with the products.

Suppose you lack the resources and time to perform all the tasks above. In that case, you should hire a professional appraiser who has a history with antique figurines. They would already have a foolproof method of valuing your figurine piece or collection.

Another way to get an idea of your figurine’s value is to compare it with sold figurines at auctions or estate sales, or you could compare the prices of items in your local antique store. Recent online sales are also great resources for getting an estimate:

Where To Sell Antique Figurines

You can sell your antique figurines via well-known peer-to-peer online marketplaces such as Etsy, eBay, Ruby Lane, and 1stdibs. They offer you a better potential to sell your findings at a reasonable price. However, you can always sell your figurines at your local antique store or start a garage sale if the piece or collection you’ve set out isn’t too pricey.

If the piece or collection you wish to sell is ultra-rare and significantly of high value in the antique market, you should consider putting it up for auctioning. It could be physical (join the event) or online.

Q: Why are antique figurines so valuable?

A: First, the figurine has to be old to be an antique. That means it should be a century-old or two or a bit less than a century old (100 years). On top of that, it has to have some form of rarity

Only a few of them have to be made and in circulation. And those very few should be in good condition.

Q: Is something Made in Occupied Japan worth anything?

A: figurines made in occupied Japan are more Vintage pieces. That means they’re from the mid-20th century. Such pieces don’t usually attract high prices.

Q: How do you tell the difference between porcelain and ceramic figurines?

A: porcelain is more delicate than ceramics, so you should expect a think bell sound after hitting it lightly with a needle. It also has a whiter and thinner appearance.

Q: How do you restore porcelain figurines?

A: There are two ways you can fix your porcelain figurine. Either after it has chip spots or it has broken down to pieces.

If it has signs of chips, please follow these instructions:

If the figurine is broken, please follow these instructions:

By now, you should be enlightened enough to know how valuable your figurine piece is and how to find newer ones that will fetch lots of profit. Along with that, you can use our top 10 Most Valuable figurines piece round-up, which can serve as a point of reference to compare with your figurine.