Captured in the majority of beloved Dutch paintings from the 17th Century Golden Age, Delft, a city in the Netherlands, is well known for its legacy in pottery making. Tracing back centuries, Delft pottery is still in production today. However, it is the antique ceramic ware that excites collectors.

Made in a variety of formats and styles, genuine Delft Pottery is high in demand today. However, while it is easy for experienced collectors to distinguish fake copies from the real Delftware, beginning collectors often struggle with Delft Pottery identification.

To identify Delft pottery, one needs to understand Delftware patterns and marks. In this detailed guide, we will make the identification process easier for you. By the time you reach the end of this guide, you should know how to separate fakes from the real Delft pottery.

While Delft Pottery is synonymous with the city of Delft, historically speaking , Delftware originated in Antwerp. Around 1500, an Italian potter known as Guido da Savino started making ceramic artwork very similar to what was eventually produced in Delft.

Ongoing conflicts in Antwerp forced potters to flee the city towards the end of the 16th century. After fleeing Antwerp in 1585, the potters later settled in the city of Delft.

Once in Delft, the potters worked to reproduce the trending pottery at the time – Chinese porcelain. Starting in 1602 , Delft City became known for its pottery products – this led to the establishment of the Delftware trademark.

In the two centuries between 1600 and 1800, Delft pottery was immensely popular. It was collected by wealthy families throughout the world.

Unfortunately, however, for many potters, Delft pottery went out of fashion slowly. This forced the potters to close their doors one by one. By the time 1653 rolled in, only one pottery producer remained active – this producer was known as the Royal Dutch.

After losing its popularity towards the end of the 17th century, Delft Pottery started regaining its appeal in the late 19th century . Antique collecting was responsible for restoring the Delft Pottery fame.

How to Identify Delft Pottery Patterns

To identify genuine Delft pottery, you will need to follow the steps outlined below:

Virtually all Delft Pottery (over 90%) produced was blue and white. While other colors – like orange and red were used – they were less popular.

Some of the reasons why most of the Delft pottery pieces used blue and white colors include:

The white color on Delft pottery was due to the tin glaze used to coat the pottery. During production, the earthenware was dipped into a bath carrying tin glaze containing salt, soda, sand, tin oxide, and lead before getting fired in a kiln at about 800 to 1000 degrees Celsius. Once fired, the tin oxide created the opaque, shiny, white glossy background common on Delft pottery.

Stilt marks are small pieces of clay that were used to keep chargers and plates separated in the kiln during the firing process. Stilts kept the plates and chargers from touching and fusing upon cooling.

The stilts were routinely broken off after firing. However, stilt marks remained. Most Delft pottery produced in the late 17th century and through the 18th century – except for the blue dash – will show a distinctive elongated scar on their back.

The blue dash plates and chargers produced during the early 18th century and the second half of the 17th century were fired upside down. This caused a small round scar on the front. Both types of stilt marks, however, are common in triangular patterns.

Flip your pottery over and check its underside. The majority of Delftware pieces feature an emblem mark at the bottom.

Examine the bottom surface for a blue marking. On older Delft pieces, the mark may be partially rubbed off.

The original Delft pottery featured a mark scribed in a font closely resembling the Times New Roman. One of the most common designs is a big blue “V” that has an “O” on Its upper left side and “C” on the upper right side.

Step 5: Look for a Crown

The crown generally appears above the writings, “Made in Holland, Delft Blue, Hand painted.” The most common design features a cross in the top middle and has a diamond below.

Step 6: Use the Expertise of a Local Antique Appraiser

If you still can’t confirm whether what you have in hand is genuine Delft pottery, working with a professional can help you. You can find an antique appraiser online or through a historical society.

Delft pottery marks are key to separating genuine Delftware from copies. Below, we will look at the maker’s marks used by Delft pottery over the years:

Between 1653 and 1655, Delftware did not carry any trademarks. For this reason, antique pottery from this period may not have a maker’s mark.

Delftware pottery produced between 1655 and 1697 had the trademark shown above. During this period, Delft pottery was largely produced by a man known as Quirinus van Cleynhoven.

Johannes Knotter took over Delftware production in 1697. He was the first pottery producer to introduce the jar common in Delftware trademarks. In 1701, Knotter sold the Delft pottery business to Marcelis de Vlught.

During this period, Delftware did not have a trademark.

A new Delft pottery trademark was re-introduced by Pieter van Doorne for the first time after 62 years. The new trademark featured the initials “P” and “D,” representing the owner’s name. The new trademark lasted until 1771 when a new owner took over the business.

Between 1786 and 1804, the Delft pottery was under the leadership of Dirck Harlees. The son of Jacobus Harlees, Dick Harlees took over the business when his father died. Dirck Harlees changed the Delftware trademark to the one indicated above.

Henricus Arnold Piccardt took over the Delftware business in 1804 and ran it until 1849. During this period, Delft pottery was using the maker’s mark indicated above.

Between 1849 and 1876, Delft pottery was under the leadership of Geertruida Piccardt. The trademark used during this period featured the owner’s initials – “G” and “P’ – and what resembled an upside-down jar.

Delft Pottery Made After 1876 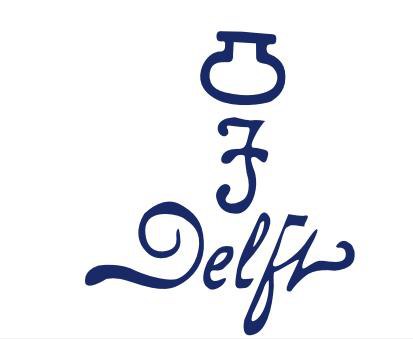 After 1876, Delft Pottery decided to maintain the same trademark. The trademark featured a jar at the top, the marker’s initials (for example, on the mark above, the initials are JT), and the city of Delft. 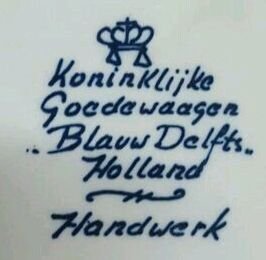 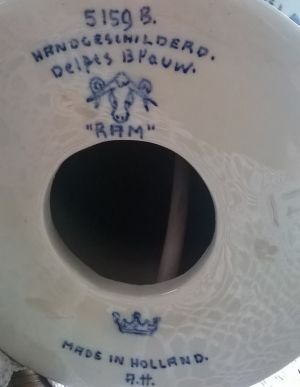 Between 1935 and 1945, Delft pottery was largely produced by N.V. Plateelbakkerij RAM. The company used the mark indicated above.

In 1945, RAM Arnhem stopped its production. At the same time, a new company by the name RAAM Delfter Faience was founded.

The new company took over the old company’s employees and molds. The RAAM Delfter Faience used the trademark shown above until the early 1980s.

The OUD Delft factory was established by a man known as Roeof Elshout in 1920. The handpainted OUD mark indicated above was used between `1940 and 1968. After 1968, the mark changed to the one below: 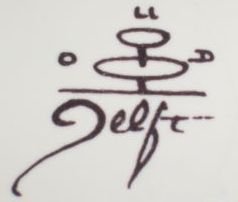 How Much is Delft Pottery Worth

Rare Delft pottery can be worth a lot of money – in the past, some pieces have sold for over $200,000 . In the following section, we will take a look at some of the most valuable Delftware ever sold:

Also known as Delftware or Delft blue, Delft pottery has been around for more than 4 centuries. Officially introduced in 1602, Delftware has gained popularity among collectors over the years. Today, the rarest pieces are worth hundreds of thousands of dollars.

The goal of this detailed guide is to help you distinguish genuine Delftware from copies and fakes. Covering everything from the history of Delftware to the different trademarks used by Delftware manufacturers, this guide answers common questions often asked by Delftware collectors.

If you feel like you need more information on Delftware collecting, we are more than ready to provide this information. All you will have to do is leave your questions in our comment section.