A cameo is a carved-in-relief hard on valuable gemstone such as agate or onyx, with characters that project from a supporting background. The profile of a face or a legendary creature is the most popular motif in antique cameo jewelry.

Figures are often carved in one layer and elevated on the framework of the second layer, which typically has two colorful layers. Today, fashionable imitations are sometimes carved in pastes or mollusk shells, a technique pioneered by Queen Victoria of England.

Let’s take a look at the top 15 most valuable cameos.

15 Most Valuable Cameos Worth a Fortune

This is a delicate French gold parure necklace with agate cameos depicting mythological figures. The necklace has different figures from Venus & Mars from Canova, dancing to Venus & Cupid playing a bow. Then you have Eros with a Muse while the huntress Diana is also there. Finally, you have Cupid & Psyche, Venus & Adonis, and Cupid & Venus making garlands with an inspired dancing figure by Herculaneum.

The broach has Cupid’s muse, while the earrings display Cupid with a quiver and a dancer with a lyre. The cameos are engraved on two layers of agates in different sizes. It has an 18k gold mounting chiseled with branches, flower motifs, and acanthus leaves.

You will see a minor tin repair on the broach and gold marks on the earrings. The sets sold in the original box with a red velvet interior and an old label and in fine condition.

This is a renaissance cameo pendant in enamel, pearl, and ruby diamond, ca. 1580, set to the center with a cameo carving with rubies and pearls. It has an openwork scrolling pendant decorated with multiple enamel colors and emphasized with four diamonds.

At the bottom, you find a pearl drop with a diamond set-top and sold with the fitted box. The cameo piece compares to the Comesso cameo found in a Viena collection at the Kunsthistorisches Museum. It is part of a Renaissance Jewelry collection with literature from Yvonne Hackenbruch, New York, 1979.

Another fine agate cameo up for auction is by G.A. Girardet set in a gold brooch. It is known as the Eros with Panoplia from the 19th century.

Giorgio Antonio Girardet, born July 2, 1829, undertook the art of engraving carving hard stones. It is a two-layer agate cameo signed by the famous artist himself. It has a Cupid front wearing the Mars helmet that is too large for his tender curly head while playing with the weapons of war.

Cupid slightly turns his head to the left to remain serene. Next, you see the figure placed above the shield while his knees point to the ground for support. A sword behind him is bound with a bandage attached to a sheath.

The image is engraved with skill but does have slight chipping found over the helmet, but it is in perfect condition. The stones are mounted on a gold frame referring to the Castellani atelier and have spherical decorations arranged in a radial pattern.

The diamond ring emerald cameo has a carving depicting the head of a bearded man facing forward. It is a millegrain-set with a cushioned rose with single-cut diamonds between the foliate shoulders and floral.

The emerald is about 17.00 carats with a French assay mark and a ring size of 1 ½. The rings are on auction with a report from Gubelin stating the emeralds are of Colombian origin. The information dates back to May 30, 1997.

This is an oval-shaped antique hardstone cameo depicting a masculine profile adorned with a flower wreath and floral. It has a yellow gold mounting with an original leather case. It is presented by the Jewelers Gioiellie Gioiello.

The historically antique cameo link necklace dates back to Italy, ca. 1750. It has 17 links that each has a double face cameo that depicts a man and woman. The prevail of each link has an openwork part scrolling design that is decorated in blue enamel.

The more prominent central cameo shows a more significant cameo drop with the same design. The cameo represents a family tree of southern Italian families in Sicily and a fitted box.

Here we have an antique cameo bangle. It has a three-carved shell panel with a yellow metal frame and a set of diamonds topped with an enameled bow entwined in the frame set with a diamond. The diamonds total 3.35 carats and are 61.6 grams. You get it with a fitted case.

The cameo necklace has 17 set panels with openwork scrolling, and floral surmounts decorated with enamel. Each of the carved cameos depicts a bust of a man and woman. The center cameo has a more considerable drop with a similar design.

The 84 silver round box with blue, silver, and white Guilloche enamel of Karl Faberge has a portrait of Catherine the Great with the Henrik Wigstorm makers mark. The solid 84 silver is of the Russian pre-revolution standards for silver.

It has the imperial warrant mark and is embellished with royal blue enamel with a white gold enamel section found at the top. The silver enamel-raised edge is genuinely stunning. Along with Michael Perchin, Hendrik Immanuel Wigstrom was an important Faberg workmaster from 1862 to 1923.

The two workmasters were responsible for all the imperial Easter eggs, and this is an investment piece you do not want to slip through your hands.

The important Victorian silver, gold agate cameo with diamond pendant and brooch is auctioned from Tiffany & Co., Circa 1890. It consists of a central-grained cameo with a seated cupid holding a bow with arrows. It is locked behind a gold bar latticework found within a brick motif carved with an onyx border. The openwork surrounded by rose and old-cut diamonds has a cable-chain link design. The diamond-set is in an open wirework base in a key with a hinged foliate motif, allowing you to wear it as a pendant.

This is a brilliant 18-karat gold pendant cat with an agate cameo. It is made with YG 750/000 platinum with blue layer stone-agate-cameo that represents a cat portrait that is masterly engraved. It comes with a Wesselton/if-vs curb chain manufactured by Andre Enskat/Idar-Oberstein made with quality. 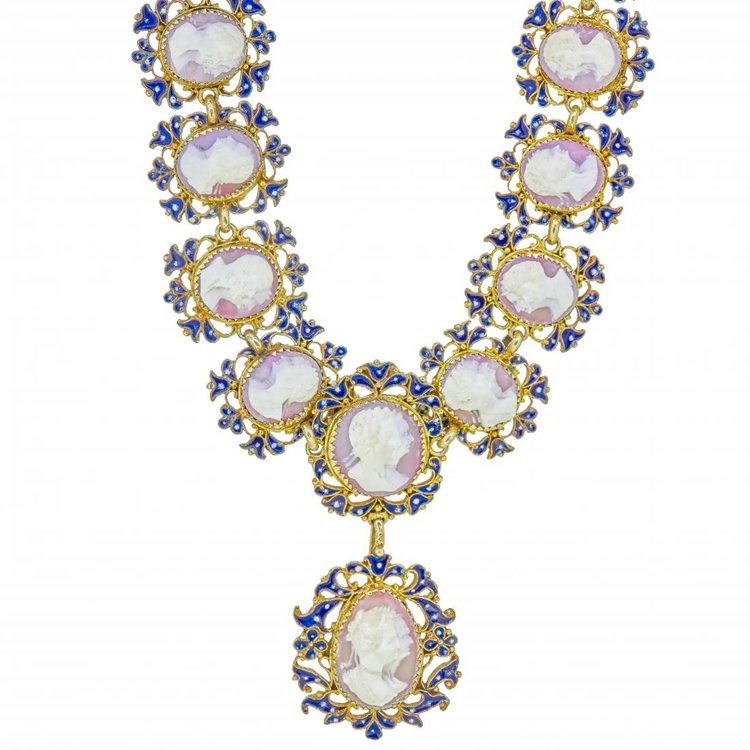 The cameo and enamel necklace comprises a 17-panel cameo set with openwork scrolling with floral surmounts decorated with enamel. Each of the carved oval-shaped cameos has a bust of a man and woman. In addition, you find the center cameo drop larger with the same design.

This agate cameo ring is a fine piece of ancient jewelry from Greek, Macedonia, and CA 1st century BCE. Yes, it is the home of Alexandra the Great, but ruled by Romans at the time made with 98% pure gold with a slightly oval shape with a flat table where the cameo is set.

It shows a portrait of a woman with a high relief feature and hair ringlets trailing down her cheek tied to the rear.

How Much Are Cameos Worth?

The most valuable antique cameos are often embellished with intricate carvings or paintings. Some popular examples of these characteristics include earrings, pearl necklaces, loose hair, and bouquets of flowers. For those who want to display authentic cameos, they may be encased in 14 or 18K gold.

As we’ve seen here, cameos can vary quite a lot in price with the most expensive ones going for over $40k. The value of your cameo is going to depend on many different factors so you may want to get it individually appraised.

If you’re interested in buying a cameo but don’t have a high budget, then there are still beautiful pieces that you can get for hundreds of dollars instead of thousands. It’s only the antique pieces with incredible detailing that reach the very high prices.

Methods for Ascertaining the Authenticity of Your Cameo

To evaluate a cameo, you need to know what it is made of. A cameo carved from stone, coral, or lava would be spectacular.

White or cream in the foreground with an orange-pink backdrop is typical for shell cameos. Carved shells are thin and translucent, making them more prone to shattering, therefore keeping this in mind is essential. Molded plastic is a less expensive alternative, but it is typically thicker and has a more realistic appearance of a shell.

This is what you’ll want to look out for:

Transparency should be examined – Check the back of your pink and white cameo by holding it up to a light source. If the cameo is made of shell, the outline of the design should be visible. Plastic cameos can also be thin, so don’t rely on this alone. If you can’t see through the cameo, it’s probably not made of shell.

Check out the carving in more detail – Examine the front of your shell cameo with a 10x loupe. Fine carving tool marks or indentations should be visible, indicating that the item is made of shell. Compared to wood, plastic provides a more consistent and polished look.

Conduct a Google search – Plastic cameos with the same face can be seen all over the place. More options are available when carving shell cameos by hand. Try looking up “plastic cameo” on Google to get an idea of the many facial expressions.

A few mass-produced cameos were carved from shell in the 1940s, but the majority of them were set in brass. The fact that they are made of shell and consequently more valuable than plastic cameos makes them “genuine,” yet they are still considered costume jewelry and as a result, their value is low.

What Are Cameos Made Out Of?

Cameos are pieces of jewelry that have high relief carvings of faces or mythical scenes. You can get a wide range of ceramics to suit your needs. Carvings are exhibited in gold or silver.

Costume jewelry cameos made of molded plastic, glass, or resin are less expensive. These aren’t hand-carved and aren’t expensive.

As we’ve seen already, the finest cameos are going to fetch a very high price. These are incredible pieces of jewelry and it’s no surprise that they are so popular. 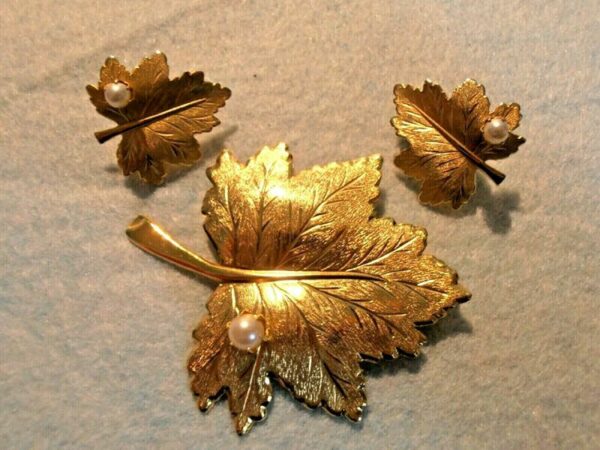 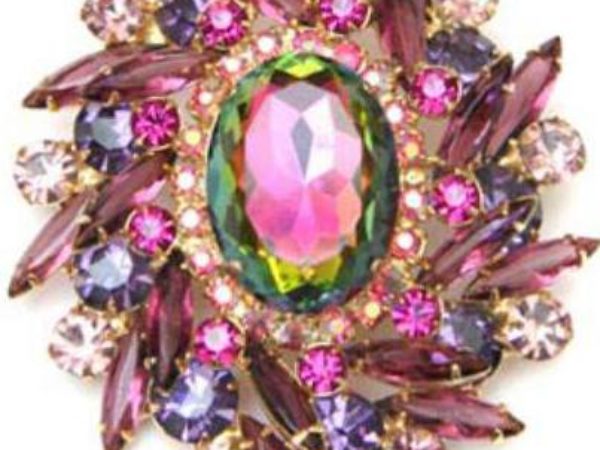 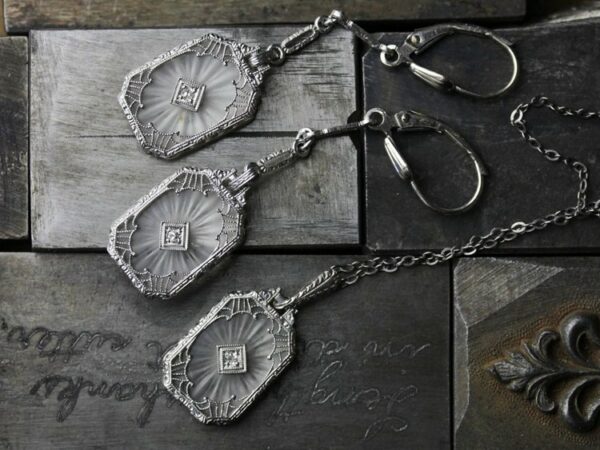 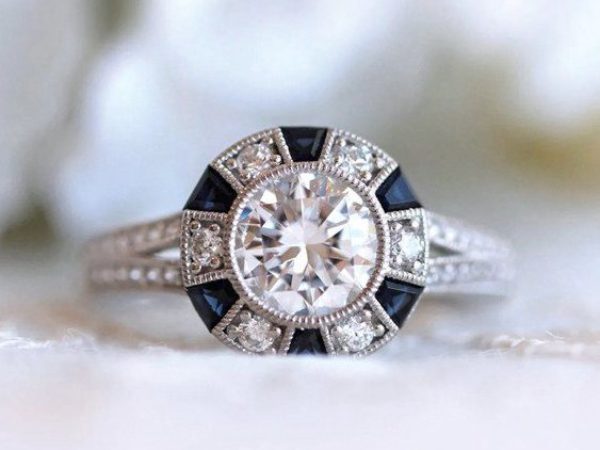 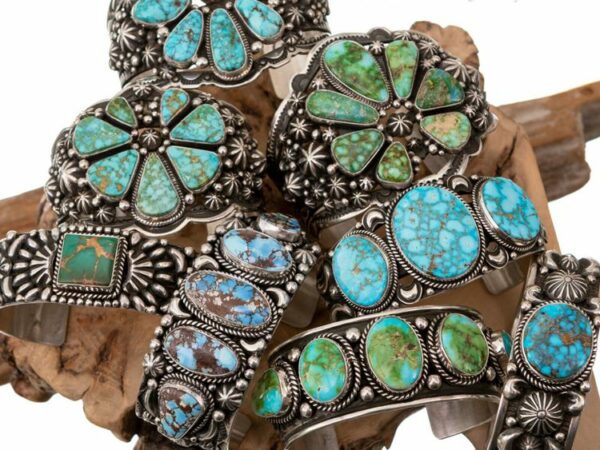 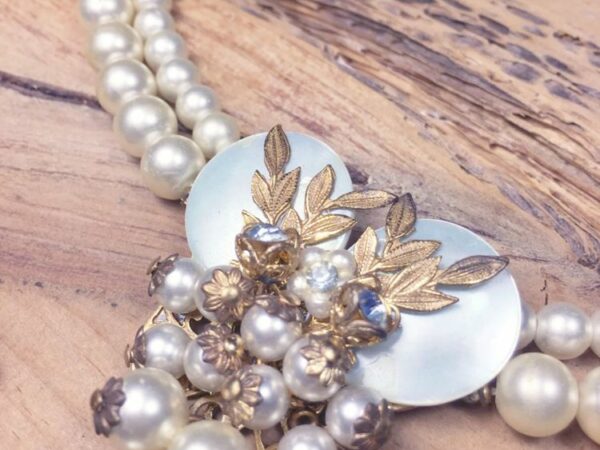 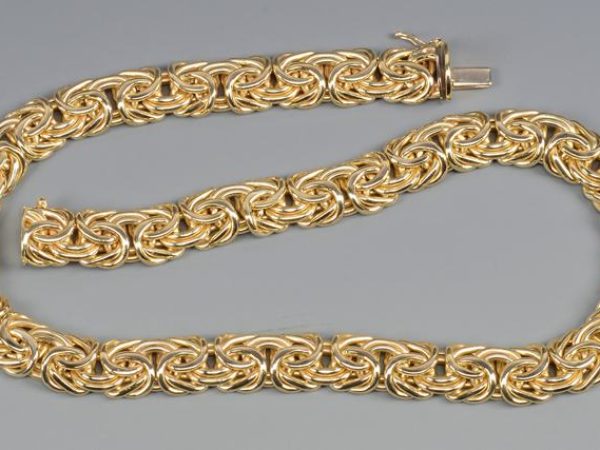 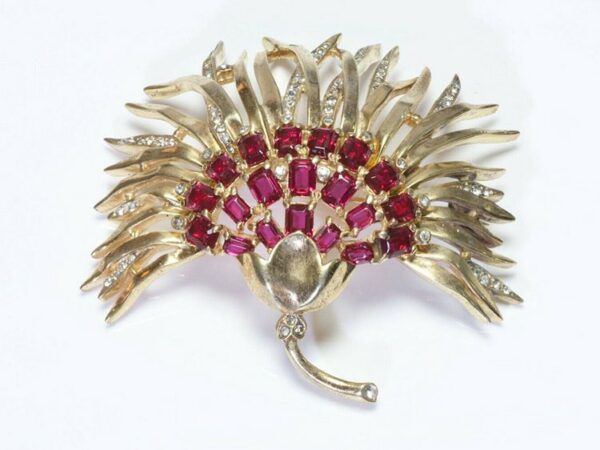