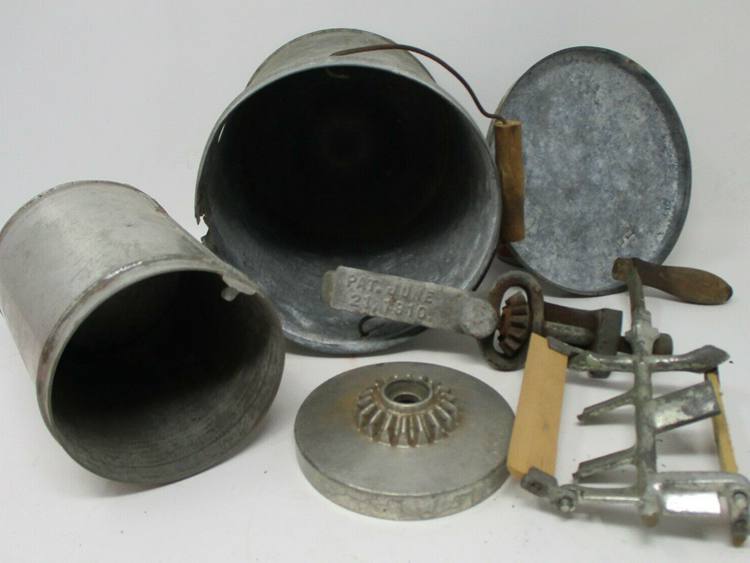 In 1843, a New York resident by the name of Nancy M. Johnson decided to obtain a patent for the original hand-cranked ice cream freezer. The ice cream maker featured a center paddle and had a crank that carried a handle.

Thomas added special churns to the antique ice cream maker to ensure a proper beating-up process that was impossible to accomplish by hand. The churns created the smoothness and fineness necessary to ensure the ice cream and flavored ice did not separate.

With excess milk, Jacob Fussell, a milk dealer who lived in Baltimore had to come up with a way to reduce wastage. The milk farmer decided to turn the milk into a product that wouldn’t go bad quickly. To Jacob, making ice cream with milk was a good idea.

Jacob Fussell is recognized as the creator of the first ice cream mass-production plant. The farmer turned the previously costly product into a more affordable treat.

With the earliest antique ice cream makers demanding ice – and with this demand increasing after the establishment of large-scale ice cream making – ice cream harvesting became a thing.

Ice harvesting became industrial in the mid-19th century. Tons of ice were cut from the coldest regions in the world and shipped to regions that consumed the most ice. In 1866, for example, more than 25 million tons of ice were harvested in the United States alone.

The invention by Carl von Linde eliminated the need to cut and then store natural ice for use in the hand-cranked antique ice cream makers.

The 1880s: Small, Improved Ice Cream Makers for Domestic Use Find Their Way into the Market

These domestic antique ice cream makers feature a metal inner pail and a paddle that is then attached to the crank handle. The crank handle sits inside a bucket made of wood. The bucket carries a freezing mixture made of salt and ice.

1926: Perfection of a Continuous-Process Freezer

Before you can use an antique ice cream maker, you will need to have your mixture ready. You can find an ice cream recipe that suits your taste and pre-cook it.

Most antique ice cream makers will come with a wooden bucket surrounding a canister that sits in the center. Fill this bucket with rock salt and ice – these will keep the canister cold.

When filling the bucket, layer your salt and ice, going heavy on the salt between the layers. Be sure to fill the bucket to the rim. Next, top it off with salt to slow down the ice melting process.

When filling the bucket, keep the canister closed. This will keep your salt and ice from getting in the ice-making canister. Also, clear the canister’s opening before removing its lid to ensure none of the cooling materials go inside.

Important: Mixing ice with salt lowers the ice’s melting point. This means that even when the ice melts, its temperature will remain below the normal freezing point of 0 degrees Celsius (32 degrees Fahrenheit).

Step 3: Pour Your Ice Cream Mixture in the Canister

Pour your pre-cooked ice cream mixture into the metal canister. Do so carefully to ensure the salt does not get in the canister.

After adding the ice cream mixture and closing the metal canister, the next step is cranking. The cranking will help aerate and smoothen the mixture. It will also eliminate the possibility of ingredient separation when you serve your ice cream.

Crank the handle around and around for approximately 30 to 45 minutes. If the ice melts during the cranking, you may need to add more. Having enough ice will ensure proper freezing.

Important: When using an antique ice cream maker, you may want to do the cranking outside. When the ice starts melting, it may leak out of the ice cream maker – this is especially the case if it is old and some of the wooden slats have come a little loose. When making the ice cream outside, you won’t have to worry about wetting your floor.

After cranking the antique ice cream maker long enough, open the canister and serve your ice cream. You should serve the ice cream immediately.

You have to eat the ice cream fast because if you wait, it may turn into a puddle before your eyes – this tends to happen on hot summer days. If you cannot eat all the ice cream at once, transfer it to a container and put it in your freezer until you are ready to enjoy more homemade ice cream.

Made of a wooden bucket and featuring a metal canister in the middle, this type of ice cream maker uses ice and salt to freeze the ice cream mixture. To ensure mixing and smoothening during the freezing process, one has to manually crank the ice-cream maker. Most hand-cranked ice cream makers take 30 to 45 minutes to prepare ice cream.

The first electric counter-top antique ice cream maker came to life in the 1920s. This type of ice cream maker utilizes a double-walled bowl with a solution between its walls – this is typically a mixture of urea and distilled water – that freezes below 0 degrees Celsius (32 degrees) Fahrenheit.

This ice cream maker was produced for the first time in the 1920s after the invention of continuous freezing. The antique ice cream maker sits inside a freezer and operates the same way a food processor does.

This type of antique ice cream maker was produced for the first time in the 1920s. The machine features an inner canister that holds the ice cream mixture and the assembly of scraper and churn.

A high-speed electric motor drives a mechanism that simultaneously rotates the metal canister, counter rotates the scraper and holds the churn paddles in place. The ice cream mixture is frozen by the ice-salt mixture outside and as the canister turns, the counter-rotating scraper removes the ice cream from the canister’s wall, returning it to the mixture.

The presence of the original marker’s marks, age, rarity, and item condition are some of the major factors you will need to consider. These factors will help you determine whether an antique ice cream maker is worth a lot or much less. Below, we will look into these factors in more detail:

Always remember that while a minor nick may be negligible, a major crack on the bucket that holds your ice during cranking may be a deal-breaker.

More 1900s antique ice cream makers in good condition are available than are well-maintained antiques from the 1850s.

Old does not always mean valuable. The value of an ice cream maker lies in its demand.

If an antique ice cream maker has been in your family for numerous generations and you understand its provenance, there is a very high chance that the antique is authentic.

After patenting her ice cream model in 1843, Nancy M. Johnson’s design was not turned into a brand until 1848. It was in 1848 that William Young made the first ice cream maker and named it the “Johnson Patent Ice-Cream Freezer.”

However, as new companies started taking advantage of Nancy M. Johnson’s design, William Young’s machine did not stay in the market for long. We tried to find the price for this ice cream brand. Unfortunately, we could not find any historical records indicating the machine’s price.

White Mountain antique ice cream makers currently available in the market date back to 1923. We analyzed several sellers online to determine the cost of these ice cream makers. The cheapest option had a price of $110 and the most expensive option would set a buyer back $499.95.

Acme was established for the first time in 1891. The company started making antique ice cream makers in the 1900s. Going by the name “Acme Ice Cream Freezers,” the brand featured a metal can surrounding the ice cream canister.

Online, we found antique Acme Ice Cream freezers dating back to 1910. The cheapest option had a cost of $30 while the most expensive had a price of $124.

Sold and distributed by Sears & Roebuck company, the Maid of Honor Antique Ice Cream Maker dates back to the 1960s. This brand features both hand-cranked and electric antique ice cream makers.

Antique Maid of Honor pieces are available online for sale. The cheapest antique from the brand has a price of $50 while the most expensive will set you back $250.

If you need more information about antique ice cream makers, be sure to let us know. Leave your question in the comment section. We will be more than happy to respond.